Where else could my "13 Rats of Halloween" series of posts for this here Plague Year of the Rat ultimately take me besides right to the infernal king of the scuttling befanged beasts himself, the nightmare turned flesh Nosferatu. Twas always eventual! Whether it's Klaus Kinski for Herzog or...

... Max Schreck for Murnau, the scariest of all the vampires has always been associated with rats. It's been ages since I actually sat down and read Bram Stoker's book of Dracula (which of course Nosferatu ripped off and almost got erased out of existence because of) so perhaps one of you more literate types can remind me if rats play much of a factor in the original text? I assume so, I just don't feel like googling it. I do know that Stephen King, when he wrote Salem's Lot... 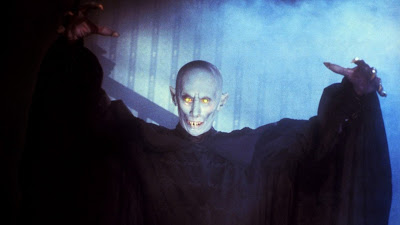 ... he removed a truly disgusting sounding scene from its earliest draft where a character is eaten alive by rats. King's (and Tobe Hooper's) Mr. Barlow of course being a direct descendant of the horrifying Nosferatu lineage of vampire.

Of course as classic as Murnau's plague scenes are I think the best plague sequence belongs to Herzog -- I consider the fancy people eating their fancy final meal together at that table in the public square that's literally swarming with pestilence to be one of the singular images of Horror Cinema. And you can tell I'm being very serious, because I busted out the word "cinema"! That means I mean it! Art! Hey... did you ever notice if you rearrange the letters in "Art" you get "Rat"? Just sayin...

Oh yeah, there are rats aplenty in the original DRACULA - not as cool as the dissolving Drac scene in Francis Ford Coppola's version, but Our Heroes face a rat attack when they're busting coffins. But Carey Elwes has special terriers on hand that he summons to battle. The rich really are different, I guess.