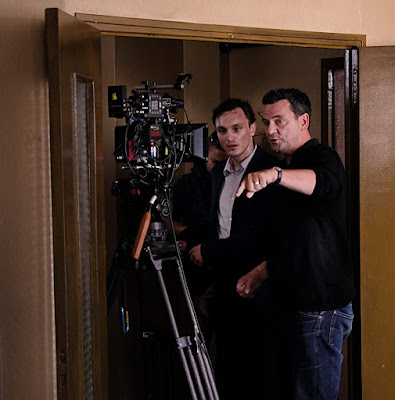 "I’m now writing on fire. The Red Sky is the name of the next movie, but I will realize the movie when the pandemic is gone, not before,” revealed the director, who was stricken by COVID-19 earlier this year. “It’s also something to do with love and kissing and homosexual love too. I want to see bodies, and so on. I can’t do it with masks and so I want to do it for real.”

-- That is German director and MNPP Saint Christian Petzold talking about his next project to the NYFF's Dennis Lim (via); Petzold's latest movie Undine is playing at NYFF tonight -- you can watch a trailer here -- and I will be watching it this weekend! I had to rent it like a common person because they weren't giving press screeners, the nerve. But rent it I did because I'm officially a Petzold fanboy after his previous trilogy of films -- Barbara, Phoenix, and Transit.

Anyway back to the content of that quote -- his next movie is going to be a gay love story! And elsewhere in this chat he also mentions X-rated dreams making their way into his script. And, uhh, this obviously made me wonder if Petzold himself is gay, but he is on the record (in a 2019 interview on Roger Ebert's website) that he is "totally heterosexual" -- and here I feel as if I must include the entire exchange because the whole of it interests me, since it gets into Sirk and Fassbinder and Guadagnino:

You frequently work within melodrama. How do you view that genre in a contemporary context? How do you see its vitality in the 21st century?

Petzold: At the end of 70s, at the beginning of the 80s, when I started going to cinemas, you have two directions in Germany: the Wim Wenders direction and the Fassbinder direction. For me, as someone who loved American cinema, I was on the Wim Wenders side. It changed some years later. Harun Farocki, his magazine “Filmkritik,” they never talked about Fassbinder. Never. I am really sure it had something to do with his homosexuality because these are men who make the film magazine. They are haters of sexual men. They like police movies and westerns. So they don’t want to talk about the music of George Clinton and the movies by Fassbinder. The melodramatic has always something to do with homosexuality. I don’t know why, perhaps it’s a little strange to say it like this, but, I think, I’ll try it in English: melodramas are filled up with empathy and also they’re very, very sad. They’re telling their stories from a position of empathy and distance at the same moment.

Translator: Artifice, too. The artifice in the feeling.

Petzold: The artificial! The clothes. The gestures. I saw “Suspiria” five days ago.

Petzold: I like it! I like it! Many people don’t like it, but for me, the dancing scenes are really great. I’m totally heterosexual, I must say. But I’m really sure this position [of being homosexual], you’re a little bit on the outside of society. You have to find your own stages. Through Fassbinder, I saw the movies of Douglas Sirk for the first time in my life, and I thought it was some great cinema. The heterosexuality of Billy Wilder and Edgar Ulmer, they came from the same group. Douglas Sirk and Billy Wilder have made movies together. The melodramas and the crime stories and the hard western stories of the genre movie, they are together for me. This is real cinema.