So for tonight’s Virtual Vincent Price Memorial Dinner my pal @kristypuchko gifted us with this VINCENT PRICE EMBROIDERY she made which... is quite possibly the Greatest Present Of All Time #vincentprice #embroidery #horror #coolshit

Last night marked the occasion of my annual "Vincent Price Memorial Dinner" party, which my boyfriend and I have celebrated with some of our favorite people for the past three years -- much like Vincent's character of Prince Prospero in the 1964 Roger Corman classic The Masque of the Red Death we weren't about to let any ol' plague come between us and a good time! (And huge thanks to my pal Kristy of Pajiba fame for that embroidery above which really is The Bee's Knees.) This year's dinner went virtual but was just as much fun as the previous two editions, although given the plague-riddled state of the world I'll admit my red plague robes took on a darker tone than usual! (See photos from last year's dinner here, which really show off the robes to full effect.) 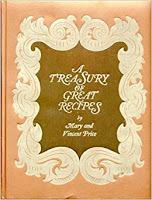 And there are a few more photos from last night, mostly of the food selection, over on my Instagram -- one thing I learned: you maybe shouldn't photograph veal meatballs under a red lamp! Everything my boyfriend cooks (newsflash: I literally cannot cook anything) is taken from one of the many cookbooks that the ghastly gourmand Price published over the course of his Original Foodie existence, but most especially his 1965 volume A Treasury of Great Recipes, which swiped recipes from all of the hottest classiest joints of the time. I'd say "no home should be without it!" but the recipes are very much of their time, so you need to be an adventurous foodie historian when eating from this book -- so much cream, so much mint, so much veal! The 1960s were a weird time for food, y'all.

Anyway this is my favorite party of the year every year and I'm glad we were able to pull it off against all the world's obstacles again, because I am now truly and fully in the All Hallows Spirit! Did y'all know that this year's Halloween there will be a Full Moon? This is the first time that's happened since 1944, and it won't happen again until 2039! Makes me feel like I should've counted down werewolves this year instead of rats... but then I remember we're literally in a plague and I feel like the rats were indeed the right choice for 2020.