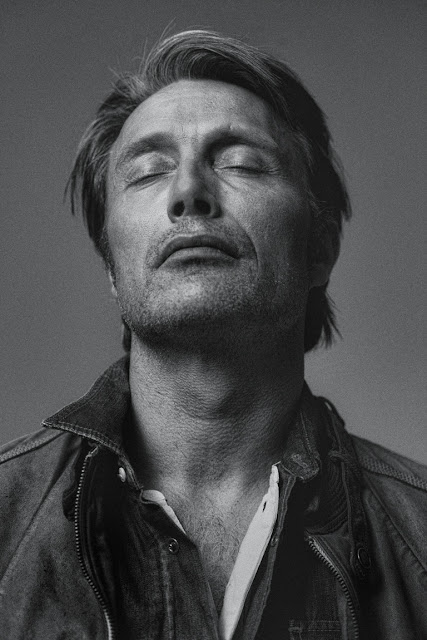 Man oh man -- or is that Mads oh Mads, hardy har -- it has been too long since I've had the opportunity to post a photo of that blessed face right there. I guess the last time I thought about Mads was right before (and I mean right before) the plague shut everything down -- the last movie experience I had with a big audience was back in March when MoMA screened Casino Royale with Daniel Craig there in person (see photos from that here) and of course thinking about that movie makes me think about Daniel and Mads' sinister sexual chemistry.

And speaking of Mads having "sinister sexual chemistry" with every man he stars opposite let's hope that's the case, big-time, with his next project, announced today (thx Mac), called The Billion Dollar Spy and which will have him calling none other than Armie Hammer's name! Before I could even type out that full sentence I'd opened another tab to check what Mads' height was -- always a concern when starring opposite 6'5" Armie -- and he should be okay at six feet. Here's the story, which is based on a true one:

"Brad Reid (Hammer) is a fresh arrival at the Moscow station of the CIA when he’s approached by Soviet engineer Adolf Tolkachev (Mikkelsen). Ignoring the advice from his bosses that Tolkachev is an obvious KGB ‘dangle’, Reid develops a bond and unique friendship with the Russian, who seemingly only wants to help his family escape the corruption within the Soviet Union. Reid’s faith in Tolkachev is rewarded when he hands over a treasure trove of military secrets, obtained using classic Cold War spy craft. It earns Tolkachev the nickname ‘The Billion Dollar Spy’ and alters the balance of power between East and West. But their success in evading the KGB comes at great personal cost to both men, and their marriages to wives Tina and Natasha, all struggling with the daily paranoia of being caught. Then one day a shocking betrayal puts them all in grave danger…”

The film is being directed by Belle director Amma Asante, who I will take this opportunity to point out is a black woman -- I only bring this up because I was googling something earlier and that wretched old Buzzfeed article that shit on Armie (as an embodiment of "talentless White Male Privilege") trotted itself past me and I got annoyed all over again, while this news here today points once again to Armie working more often than not with underrepresented voices. He seems like one of the good guys, y'all. I know he's got a gigantic bullseye on him because of all his born privilege, and he's admittedly been a bit... high-strung this past year... but who hasn't? Good god I've been half-deranged for months. All the best people are doing it!
Who? Jason Adams When? 12:43 PM
Labels: Armie Hammer, gratuitous, Mads Mikkelsen

Honestly why is Armie a fridge too far for straight white male actors when there are much worse examples out there still inexplicably getting work (I'm still struggling to figure out why Ryan Reynolds is a thing.