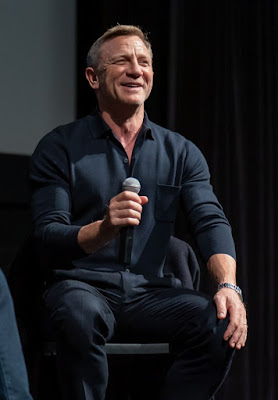 As foretold by the oracle called Me there was a screening of Casino Royale at MoMA here in New York last night with Mr. Bond, James Bond himself there in person -- above is a professional snap taken at the event from a spot much closer in the audience than I sat, and below are some photos and videos I took from the Q&A. The Q&A which included a round of "Happy Birthday" with cake and candles and all that jazz! (As we noted two days ago Craig just turned 52.)
.

.
For the rest of March MoMA will be screening movies starring Daniel Craig, including among many others Knives Out and Munich and Love is the Devil (one of my faves, which has Craig playing the lover of painter Francis Bacon) and speaking of gay stuff my absolute tippy-top favorite Daniel Craig movie called Enduring Love, which has Rhys Ifans becoming psychotically infatuated with Craig after they survive a hot balloon disaster. 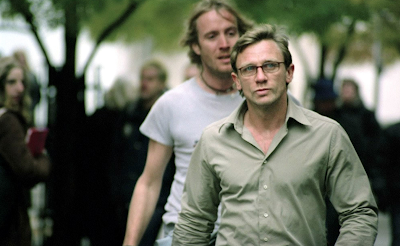 Last night alongside the convo MoMA also debuted a few minutes of a forthcoming documentary about Craig's time playing Bond (which will no doubt end up on the blu-ray for No Time To Kill once the time for that comes around) -- they showed us a bit of his and the producer's decision-making process in choosing one another, including his screen test (which Craig risibly snorted at from the audience to much amusement). Anyway speaking of No Time To Kill, did y'all see the new photo from the set of Craig with director Cary Fukunaga? It gave me some feels...
.

If these were action figures this would be the part where we would be mashing their heads together like kisses pic.twitter.com/rR1iXOWzyS
— Jason Adams (@JAMNPP) March 2, 2020