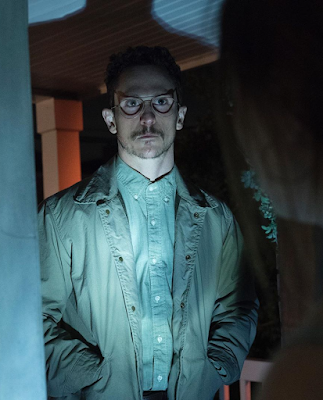 Per usual October, my favorite month, has only been here for one day and it's already running away from me -- I've still got a million NYFF reviews to write and next week there's the Nightstream Festival and the week after there's NewFest -- but I'd be remiss if I didn't mention Hulu's killer All Hallows content, which starts creeping into our homes this week. Today the anthology series Monsterland debuts, which I've only had time to watch the first episode of but which was pretty terrific -- that one stars Jonathan Tucker at his serial-killer-iest (seen above), a true kink if ever there was. You can watch the trailer below. And starting next week on Hulu is the adaptation of Clive Barker's Books of Blood series of short stories -- I posted about that previously.
And then there's the horror flick Bad Hair, which we just got a trailer for (see that below) and which I totally recommend -- I don't know if I'll have time to properly review it given my schedule but it's a ton of fun, almost a horror comedy more than anything else but I do think it's actually genuinely creepy at times, and I don't want to diminish that. Bad Hair slithers onto Hulu on October 23rd!
Who? Jason Adams When? 12:31 PM