Icy Fingers Up & Down My Spine 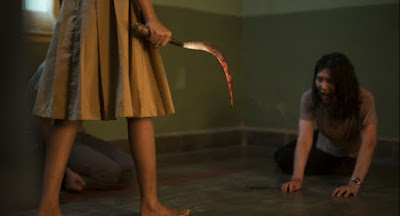 Centipedes. Why did it have to be centipedes? Okay so that's not exactly what Indiana Jones says -- although he should have said that in Temple of Doom when it is indeed centipedes -- but it's what I sure as fuck said as so many centipedes skittered this way and that with their thousands of utterly repulsive legs in the new Indonesian horror flick The Queen of Black Magic, which is streaming as part of the Nightstream festival and which will be hitting Shudder soon. I just can't with the centipedes, man!

Out of the many fears inflicted upon the horror movie watching community there are only a couple that really truly get to me, and The Queen of Black Magic has the two main worst ones -- bugs and self-mutilation -- crammed up her diabolical lady sleeves. Quite literally, as the flick revels in making its characters self-mutilate because they have centipedes up their fucking sleeves. See how this movie has me using foul language in a movie review? That's how emphatic I am about how truly grossed out this movie made me. And I loved every goddamn minute.

I suppose I should set it all up. Director Kimo Stamboel, with a story by director-writer Joko Anwar (who himself just gave us the terrific gem Impetigore earlier this year), invites us to meet four men and their families who are all converging on the same orphanage in the middle of nowhere where they all grew up. Well three of the men are converging and one's already there at the orphanage, where he still lives and works as an adults -- Maman and his wife Siti have invited his old friends Hanif, Jefri, and Anton to come see their old care-giver Mr. Bandi, who's on the verge of death.

Slowly, shit unravels. Well slowly at first, and then real fucking fast all at once. There are, as there always are in these movies, most terrible secrets buried beneath the floorboards (or in this case the cement), and the vengeance of the done-wrong is coming for all parties involved. And Stamboel's film feels in its way like a substantial summation, an all-but-the-kitchen-sink re-telling, of creaky old tales that came before, in the same way that Poltergeist reimagined the Haunted House story for the Suburban Generation -- The Queen of Black Magic is riding on a wave of real good Indonesian Horror and it feels like a statement piece. A "here's everything we got coming at you, packaged up big and loud and scary."

And it is all of those things! It's a hoot and a holler and it made all of my nerve-endings twitch. I was scratching at the balls of my feet and literally covering my eyes. Closing the windows. Pulling the blankets up over my damned fool head. It's not really anything you haven't seen before, but it's everything you have seen before strapped ass-first onto a top-notch rollercoaster from hell and you're coming along for the horror. The creepy-crawlies have got your number and are knocking on the door with this one, my friends. 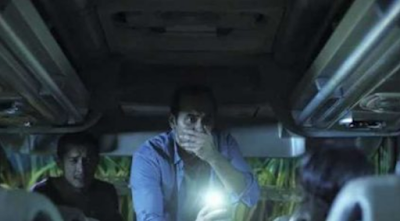 The Queen of Black Magic, like most of the films I've reviewed over the past few days, is still streaming online as part the Nightstream Festival -- you can check the list here! Everything is still available through the 14th, so quick run and hurry, see what you can before they vanish. This one will be on Shudder at some point in the near future -- I don't have an exact date but I'll make sure to share when it's available cuz man is this movie some fun.