Get On Your Knees For Monty 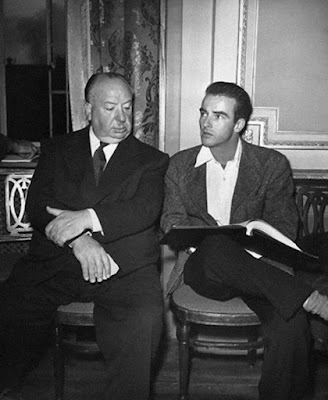 You know that part in Clueless where Cher and Dionne, in the middle of their set-up, look at Mr. Hall & Miss Geist drinking coffee on a bench outside school  and Cher says, "Would you look at that body language? Legs crossed towards each other. That is an unequivocal sex invite." Well the above photo of Alfred Hitchcock and Montgomery Clift on the set of their 1953 film I, Confess is the exact opposite of that. The two really didn't mesh, but I still think I, Confess is a fascinating movie, both because of that friction and because it has Montgomery Clift walking around in a priest costume, let's be real.

Everybody stares! Anyway for The Film Experience's currently ongoing centennial celebration of the actor I have written up some thoughts on this movie -- click on over to read 'em. Well go on. And just to set the record straight don't act like you wouldn't break your marriage vows in a split second if you got trapped in a gazebo overnight with a sopping wet Montgomery Clift in an army uniform...