Smile For Your Sins

Thought I'd start with a happy image, one totally at odds with the film itself, before diving back into David Fincher's Se7en for the second time of the day, here on its 25th anniversary. Enjoy that smile while you got it, kiddos. And that goes to everybody, all the time. Now onto the serious business -- I wrote a "Horror Actressing" thing about Se7en, specifically Gwyneth Paltrow's performance in Se7en, today at The Film Experience! Click on over to read it. I know it's "cool" to hate on Gwyneth (and lord knows she's earned her vitriol now and then) but I've always been of the mind she's a terrific actress, and she remains terrific in Se7en in a smaller-than-I'd-remembered part. And I know you're lying if you say you wouldn't want to go back to the mid-90s right now. Even as a gay person who had far fewer rights back then, with AIDS still raging, I would 100% go back there then. Look how simple things were, at least if you were a beautiful blond(e) rich movie star... 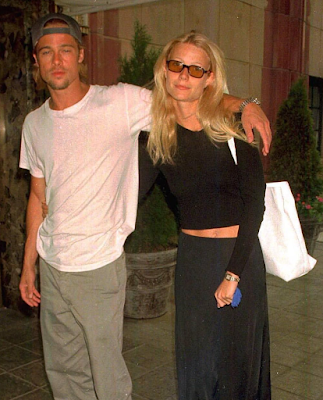 Gwyneth made me lover her in THE TALENTED MR. RIPLEY and I've never looked back.