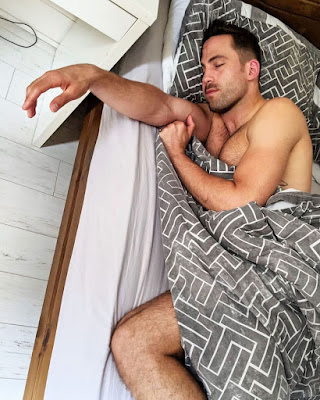 I keep on saying I'm gonna do a "Gratuitous Dino Fetscher" here on the site and I keep... not. So we'll stick our little toe in the water this morning with this photo above that the actor -- ahem excuse me, the openly gay actor -- just shared on his Insta. And oh look and this was the top photo in his boyfriend's feed: 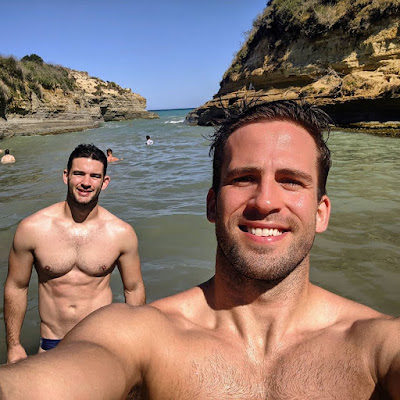 Well I assume that's his "boyfriend" given their interactions but it's not my job to be labeling other people's lives, I suppose. His very handsome friend who takes pictures of him sleeping probably naked and uses the phrase "find yourself someone" when talking about him on their social media then. That's just a bit long to type is all.

Anyway Dino was on the terrific Years and Years last year (that show with Russell Tovey I talked a bit about) and he was on Humans (which I never saw) and a little further back he was on Queer as Folk creator Russell T. Davies 2015-ish series' Cucumber and Banana, which I will just admit I somehow still haven't seen, much to my own shame and degradation. (Fight off the impulse to make a comment about how Dino can degrade you any time, Jason, fight itttttttt.....)

I know the reason why not is "he is openly gay" but
Dino Fetscher really should be a bigger thing, can we make him a bigger thing pic.twitter.com/OIrOVpuc6R
— Jason Adams (@JAMNPP) August 24, 2020

I really loved 'Years and Years'. It was heartbreaking.

Thanks for the gratuitous Dino. I'm very grateful.

You need to see him in Banana.

I'd recommend staying away from Cucumber and Banana. His character's not a good person in there (I ended up hating him) and as for the rest all that I can say without spoiling is that what goes down is just not good for the soul.

And he's excellent on the Netflix series Paranoid. Cute and sexy and talented.