Twas Sir Tom Hardy's 43rd birthday three entire days ago (sidenote: now there's a question, do we think that Tom Hardy will ever be knighted?) and nary a peep round these parts -- really a shame, that. So I did some digging and came up with a treat I'd personally never seen before -- Tom rocking a pink lady robe and doing some extracurricular fucking in the 2009 UK TV miniseries The Take. Anybody seen The Take? I don't think I had even heard of The Take until today, but you can watch the entire thing on Tubi, turns out. 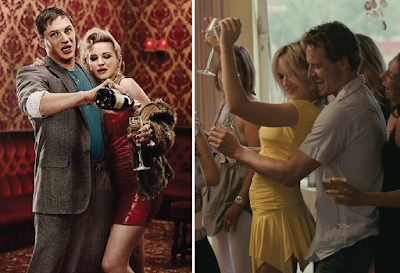 Oh and PS the woman you'll see in the gifs down below having "relations" with Tom is the actress Kierston Wareing, who also had on-screen "relations" with Michael Fassbender in Fish Tank that exact same year... (On a sidenote she was really excellent in Fish Tank performance-wise too -- I even wrote about her at the time!)... making of Kierston Wareing our new overlord and queen, all bow the fuck down. I want to have a conversation with Kierston damn Wareing now! And hit the jump for belated birthday Tom...

He is an enormously sexy and appealing man and a very fine actor but he has some of the ugliest tattoos I've ever seen. A real shame.

I'll admit that I am not a tat fan in the least but if they're small and mean something to the person that's one thing however when someone starts to look like a human doodle pad they lose any effect at all outside of being either hideous or ridiculous.