Yesterday I hope you headed over to StinkyLulu land and read or partook or read and partook in 2010's Supporting Actress Blogathon. I personally flopped out for the day but promised to catch up today, which... I am now doing. Here are some thoughts on five of my favorite supporting actress performances of 2010. 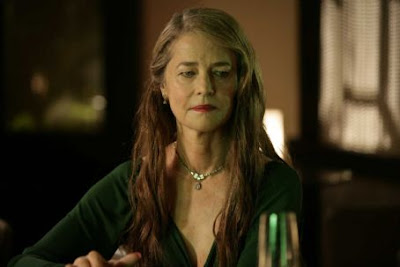 Charlotte Rampling, Life During Wartime - A friend of mine thought that Charlotte Rampling's character in this film was Ciarán Hinds, who she shares her scene with, wearing a wig! And that Todd Solondz was doing some kind of weird split-screen Parent Trap-like thing here! I add that hysterically amusing bit of misidentification because a) it's hysterically amusing and b) it underlines how vanity-less Rampling allows herself to be in this role. Indeed that's an understatement - she's terrifying. Her hair's like a pack of tightly coiled snakes that've been electrocuted and died in long agony. Her nails are long red predatorial claws. She doesn't so much sip her drink as attempt to turn the tumbler into her victim. Solondz's eye is always... let's say "critical" of his characters, but Rampling takes what could've been a pathetic stock character being dunked in his usual vat of humiliation and singes the screen with her self-hate fueled fury. As I said in my review of the film about her scene:

"It's a pulsing open wound on the screen. So painful and sad that it took my breath away. If there were any justice... Rampling would get an Oscar nomination for her work here - it's lacerating."


And here still, months away from having seen it, I can feel the shudder creeping up me from it.

Keira Knightley, Never Let Me Go - As I looked through the list of 2010 films and ran my brain through the Supporting Actresses I could choose to celebrate, Knightley's work in Never Let Me Go called out to mee not just because I think she does terrific work in the film - which I do - but because I basically owe Knightley some apologizing. I liked her performance in Pride and Prejudice a lot but around the time of Atonement I began to dismiss her as a snotty prop with a bulldog-like under-bite, and I hated that she got cast in the film adaptation of one of my favorite books here. And then she went and broke my damn heart. Watch that scene in the hospitalwhere Cathy and Ruth reconnect for the first time after a number of years. The way Knightley's body is a busted gangle of sharp edges that she's trying but failing to keep as proud and upright as she can. Right about then was when the crying started and it didn't let up til the end. Or ten minutes after that. Alright I'm crying right now shut up! 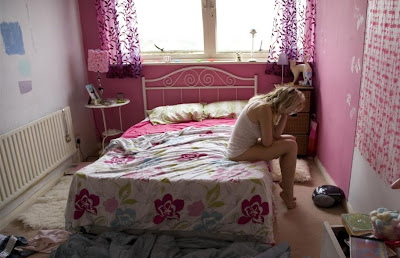 Kierston Wareing, Fish Tank - Director Andrea Arnold balances Fish Tank on the slimmest precipice; all the better to capture the sight of the roiling froth of teenage confusion below. This is a film that wants to dive headlong into uncomfortable spaces - Arnold wants us to feel everything Mia's (Katie Jarvis) feeling, from her attraction to her mother's latest fling Connor (casting Michael Fassbender achieved that succinctly) to the exhaustion and disgust and jealousy she feels towards her stunted mother. Wareing spends 99.75% of the film being downright awful - she's playing a selfish, pitiful, and lazy woman who eyes her daughters like competition for couch-space (and she was so wrapped up in her own drama that she never seems to realize it was something else of hers Mia wanted to climb on top of). But she's an entirely believable selfish, pitible, lazy woman, and even as their relationship despairs she and Jarvis manage to make their slow dance so human it hurts. 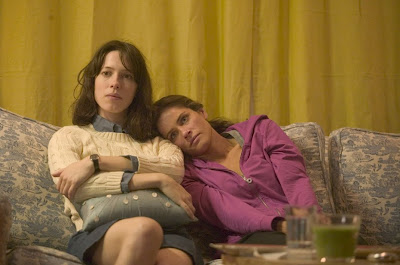 Amanda Peet, Please Give - I don't know that any of the ladies in Please Give are really supporting - it could be argued that Peet's got nearly as much of a story as do Catherine Keener and Rebecca Hall, I suppose. But I'm not one to waste too much time quibbling over those definitions - life's too short, man - and in a lot of ways Peet's role feels the most supporting of the three so I'm just rolling with it. It gives me the great excuse to heap love at her spray-tanned tootsies, anyway. Peet's always seemed under-appreciated to me; thankfully we've got directors like Holofcener that know they can hand a terrifically unlikable character like Mary to and they'll get a performance this funny and surprisingly hesitant from them. Peet keeps saying horrible things but you can tell she's horrified by them herself. It's as if she's slathered herself in a bronze shield - what once might have been golden and pretty has spoiled and she can't seem to find where it went wrong, but she knows it has. 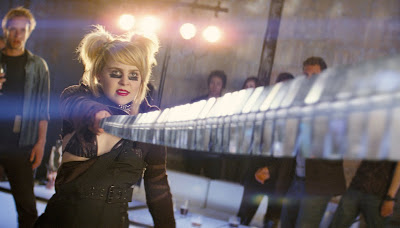 Mae Whitman, Scott Pilgrim vs. the World - I've already made my argument over why I didn't find Edgar Wright's portrayal of the character of Roxy to be sexist or homophobic, both claims that've been tossed about, but what it all comes down to in the end, what trumps any of those considerations, is how Mae Whitman - among a cast of one stand-out after another- manages to take what's at most five minutes of over-the-top cartoony screen-time and knock her every single syllable outta the park. She makes Roxy so big and so funny you hyperventilate upon her. Whitman doesn't so much perform this part as she does jump down off of the screen, miniaturize herself, and climb straight into your eyes and ears to tickle your synapses directly with her tongue. I have praise for every person in Pilgrim but of Roxy I want not just more but most. Lesbiansssssssssss.
.
Who? Jason Adams When? 5:05 PM

If you think Rebecca Hall, Catherine Keener and Amanda Peet were all leads in Please Give, one supporting performance you might also spotlight is Ann Guilbert's surprising approach to a cliché character in the same film.

Thanks so much for your article, very effective piece of writing.