This gif of the actor Tom Mercier slipping whilst nude in the movie Synonyms works on a couple of levels this morning -- on the one hand this is how this morning has felt to me so far: like a pratfall. And on the other it's here because Luca Guadagnino's HBO gorgeous and moving new series We Are Who We Are premieres tonight at 10pm, and as I have made clear via ohh a few posts, Tom is on that show. Watch the trailer here.

I AM THREE MINUTE INTO WE ARE WHO WE ARE AND I ALREADY LOVE IT, SURPRISING ABSOLUTELY NOBODY

I've seen half the episodes so far (that would be four) and I'm already distraught I only have four more hours to spend with these people. I know I fit the definition of "already in the tank for this" but it was entirely possible, because the show is of-a-feeling so hard with my beloved Call Me By Your Name that I would look at these characters -- none of whom are anything like the people in CMBYN -- and said nahh, no thanks, I just want my Elio & Oliver. And yet Luca, with his exquisite camerawork and editing, his ability to transport you to another world both spatially and emotionally, it's out in full force. This show captures magic. 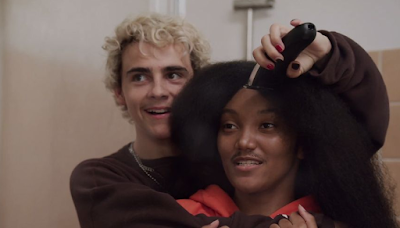 Also I love love love these two and their characters more than I have loved any TV characters in ages. I had my doubts about Grazer as an actor -- the nepotism thing -- but he's really created a fresh character here, straddling a whole lot of David Rose from Schitt's Creek with a little (very little, but it's there) Elio peeking out in the background; mainly his "Fraser" is way more of a shit and a spazz than Elio would ever have been, but in ways any young gay man will recognize. And Jordan Kristine Seamón is a revelation -- this is her first job (!!!) and I hope she works forever and ever from now, I want to stare at that incredible face of hers forever.
I'll no doubt feel more comfortable writing more about it once all eight episodes have aired and I can see it as a complete picture -- this really will, I think, feel more like an eight-hour film when it's done, than proper TV, although he does play with the convention of "episodes" as the story goes along. I side-eye the people who call Twin Peaks a movie because that show's rhythm was all TV -- We Are Who We Are is episodic but in a novelistic way. It feels like a single story, at least four hours in. We will see! For now just watch the damn thing, it's incredible, just incredible.
Who? Jason Adams When? 10:01 AM

I hope his characters read as queer this time. You don’t need to play it “stereotypical” per say but there should be at least queer subtext to your portrayal. I didn’t like Call Me by Your Name because it was very clearly two heterosexual males with zero
chemistry.

As much as I love Luca and Tom Mercier, you sold it with Grazer's character being a combination of David Rose from my beloved "Schitt's Creek" with shades of Elio. Yes please!!