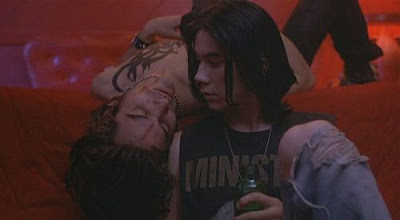 Jordan: I feel like a gerbil
smothering in Richard Gere's butthole.

In 2015 I christened September 10th "Doom Generation Day" because September 10th marks the birth of that movie's two male leads -- Johnathan Schaech, who played nut-bustin' cowboy Xavier Red, was born on this day in 1969, while James Duval, who portrayed our passive pretty boy Jordan White, was born on this day in 1972.
And since this subject comes up every time too I must add that it's hard (impossible, really) to believe that five years later The Doom Generation, like most of Araki's movies, is even harder to find -- the DVD goes for 100 bucks now! When the hell are we going to get a fancy Gregg Araki blu-ray boxed-set already??? What are you thinking, Criterion? Also hard to believe: TDG will be celebrating its 25th anniversary in October!

If they do a boxed set of Araki's work can it please, please, PLEASE include Now Apocalypse?!