Criterion's Crashin' Into Me 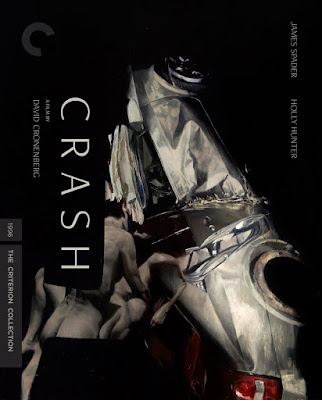 Y'all shoulda heard the sound that squeaked outta me when I opened my email from Criterion today, with our December release announcement, and David Cronenberg's delicious NC-17 perv-fest Crash was staring right back at me. Believe me when I say that it was... basso profundo, my friends. Twas a helluva squeak.

I actually haven't seen Crash in quite awhile, so I look forward to spending my holidays rubbing my scars up and down its smooth surfaces -- it hits right on December 1st! Here are the extra special features on the set:

But that, of course, is not all Criterion's got up their sleeve for the holiday season -- they're also dropping Robert Bresson's Mouchette, Alejandro González Iñárritu's Amoros Perros, and William Greaves' two-part "one-of-a-kind fiction/documentary hybrid" Symbiopsychotaxiplasm -- I bet they're breathing a sigh of relief that they had Greaves (a black filmmaker) on tap for release after that recent NYT piece rightfully took them to town for their lack of diversity. Anyway you can read all about them over on Criterion's site! Thoughts on these choices?
Who? Jason Adams When? 2:33 PM