Witch Which Is Witch

... and speaking of did y'all see the news that slipped out about mother-fucking Björk being in Egger's upcoming Viking movie The Northman? Opposite Nicole Kidman and Alexander Skarsgard, she's playing some sort of witch. I'm dead of excitement from that, but -- once again rendering poor Kate Dickie to a footnote -- I was also super excited to see Kate's name show up on the same leaked cast list. Witch Reunion! Honestly, and I honestly say this all the time, Kate Dickie should be in every movie. EVERY ONE. I am in no way shape or form kidding. Imagine her as a slapsticky detective in a Paddington movie! Or voicing one of the Trolls in a Trolls cartoon! As Willy Wonka! Leopold and Loeb! She could do them ALL. We are a Kate Dickie Nation up in this business. 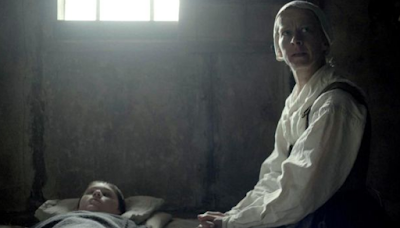 I snorted loudly at Leopold and Loeb!