Because We Could Not Stop For Death 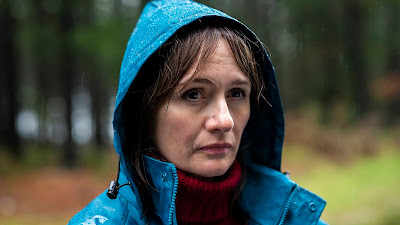 I am, as the saying goes, currently in the throes of grief. My cousin died two weeks ago from cancer. I, like many other gay people, have family issues, ones which keep many of those blood relationships strained, but that was not the case with this cousin -- we'd been close since children and remained so for my, her, our entire life. She was four years older than me and lived several hundred miles away for most of our time together so that tempered the closeness, but she was one of the good few, the family members I could always count on. I am fairly, to put it mildly, devastated.

We lost her mother, my aunt and another one of the good ones, a few years earlier from the same sort of cancer in the brain. My cousin found out she was sick literally the same month her mother died, a terrifying passing of some genetic baton which I can't imagine, I cannot imagine, the weight of. I have watched stunned from a distance the ups and downs of it, a valiant fight wearing down, year by year, an inherently decent, kind, and happy person. It is one of the most inexplicably cruel things I have ever witnessed, amid a period of so much cruelty all around. Just one more stick of kindling for the world's burn.

The word inadequate feels inadequate for how inadequate I feel including all of this real-world scalding sadness inside a review of a horror movie, and yet there's no way for me to talk about Relic without it, because watching Relic as I did, a couple of weeks back and in the middle of my cousin dying, it's all that there was there in the room with me. It's a film about loss so huge it singes the walls and ceilings -- about generations of grief folding in on themselves, simultaneously warm and smothering; the particular comfort of suffering together. Of holding hands even as they scratch back. 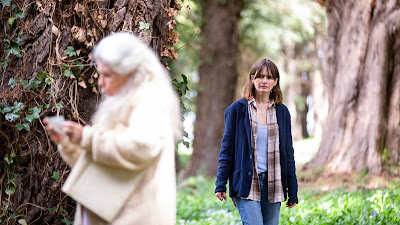 Kay (Emily Mortimer) and her daughter Sam (Bella Heathcote) have traveled a long distance to check in on how Edna (Robyn Nevin), Kay's mother and Sam's grandmother, is doing in her old age. There is estrangement between Kay and Edna, between Kay and Sam -- Kay is everybody's bad cop, sitting in the middle and feeling resentments from both sides. And Edna is not well at all -- she goes missing, her memory and personality dissolving into the ether around her, flakes of skin floating off. She is, before our eyes, disassembling, becoming something else altogether.

Relic situates itself against the very real horror of every one of us disintegrating at our end, and the people who are forced to sit and watch it happen. This is, as the saying goes, the scariest horror for all of us -- Death itself. Pure and pitiful and epic in a single swoop. It's all there is. It's what all horror movies are about in one way or another but Relic has less outlandish metaphor in its way -- it  shuffles off the slasher-beasts and confronts the nightmares head on, making direct metaphor of the very act itself. Edna's transformation into monstrousness is every human being's tragedy -- it's the fate awaiting us all, and that's if we're lucky.

And the film bless the film understands just how lucky it is, to have someone there to go through it with you. To hold you down as you shake and vomit and scream, to wipe your face and your shit clean. The delicacy and precision with which writer-director Natalie Erika James and her actors approach all of this, keeping us inside of a Horror Movie and giving us enough of a Jump Scare release valve for these exquisitely painful, personal circumstances, is fine-toothed and somewhat delirium-inducing. Relic is so smart and simple about its purpose, its aim, it seems dumbfounding in its wake nobody managed to make it before. The second it was over I could feel it sitting beside me, holding my hand -- Relic's a haunting for life. 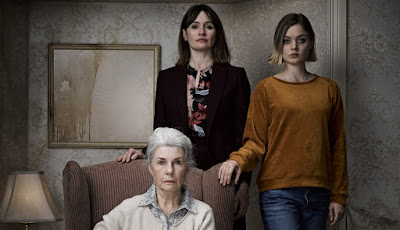 My deepest condolences to you Jason on the loss of your beloved cousin.

good lord, i did not expect to cry coming here

[sorry for your loss]

I'm so sorry for your loss Jason!

Sorry to hear about your cousin, I recall you mentioning her before.

I hadn't heard of this movie, and when I clicked the link, I was wondering what made you revisit the museum monster movie The Relic (1996?).

As always, your writing is wonderful. Thank you for your candor and honesty, the sharing of pain, and the articulation of the feelings the film conjured.

Saying I'm sorry for your loss seems rather small, but I guess it's all I can do. I'm sorry as I'm grateful for the beauty your words always bring to my life when I read your reviews, even when they make me cry.

Also, can't wait to watch Relic. After reading this, it went straight to the top of my watchlist.

I'm very sorry for your loss Jason. My Dad is getting treatment for his second bout the cancer, both caught early

Jason, As the previous commenter says, I didn’t expect to cry reading a post here, but you are always writing from an honest place, so writing about your cousin and Emily Mortimer feels part of the same thing. When you find words to communicate something as painful as this, you bring comfort to others, especially those who knew your cousin. Truly, condolences.

I’m sorry for your loss.

Jason, what a wonderful gift of expression you have. Thank you for sharing. I hope that in writing you are able to relieve yourself of some of the pain you are experiencing. I send you my love.

Sorry for your loss. Sending my love