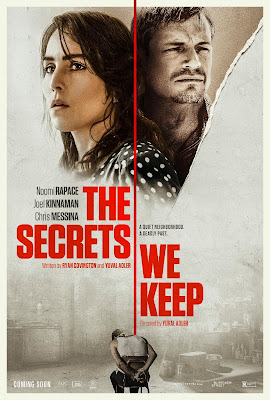 Last week I showed you a couple of photos from The Secrets We Keep, the thriller starring Noomi Rapace as a Holocaust survivor who comes upon a man she believes to be the Nazi who tormented her, played by Joel Kinnaman, and kidnaps him to get her revenge. With added support from Chris Messina as her husband who wears suspenders. Well now we've got a poster and a trailer, and here I am sharing those things with you.

so... Death and the Maiden, with different nationalities...

That's what i was going to say...didn't we already have this film and it was called Death and the Maiden?