Okay so who's caught up on Lovecraft Country? It took me a couple of extra days but I am now caught up, but so much happened in this week's episode that was... kind of all over the place, to be honest, I hesitate to talk about specifics. The plot bounded forward, backed up on itself, and then bounded forward again like one of those Lovecraftian beasties that keep bursting out of the dirt. It wasn't great storytelling, and it was edited poorly trying to cover up some of those erratic swings of plot...

... but I am willing to cut the show a lot of slack, it's only the second episode, and they delivered on an even more important front than any nonsense like "plot" -- they upped last week's already lofty "gawking at Jonathan Majors" ante by about tenfold. This show likes to stare at Jonathan Majors! A lot! And for that it is a gift beyond measure, as we, you know, also like to do that. And we're gonna, a lot, after the jump... 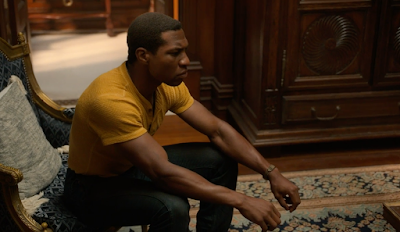 I don't know how to feel about this show...

I love the actors. I love the political/social commentary. But I find the sci-fi/fantasy elements are incoherent. Or maybe it's just over my head? I thought episode one was FANTASTIC. Episode two was a hot mess.

I was totally surprised by the climax of Episode two. I thought we would be just settling in for more storytelling and involvements at the castle and then blam it came tumbling down so where to go from there?. Looking back it seems like Episodes one and two should have been combined as the set up pilot for the show. Now where do we go from here?

Lovely Hunk Of A Man

It all seems to be following the basic tone of the book which is very episodic. I predict that, like the book, each episode could almost be its own mini-story since there in the book there was very little follow through surrounding "events." It reminds me of the short comings of any season of American Horror Story where there is this great idea with fascinating characters who only show up in one episode and are completely forgotten about by the end

Although I wanted to love it, I'm not a fan. Very uneven. The cast seems wasted. And the production values are not on par with what I expect from HBO. Say what you will about American Horror Story, at least that show goes off the rails midway through the season, not in the first or second episode...

Jonathan's physique is the best stuff of the series so far. The show itself is too weird.