Sailor: Too bad he couldn't visit that old
Wizard of Oz, and get some good advice.
Lula: Too bad we all can't baby.

It's the 30th anniversary of David Lynch's nuttiest road romance Wild at Heart, which continues to be hotter than Georgia Asphalt and real weird on top a full three decades on. I just re-watched this movie a month or so ago and ooh golly does she peel your face off on that pavement, at times anyway.

I have to admit that WAH always feels more like a series of moments and characters to me than it does a Finished Statement, though -- I mean, oh what scenes and characters! For sure. And perhaps the sketchiness is just part of the Dream Logic... but that's letting it off the hook, a little bit? Inland Empire is four hours of just Dream Logic and that felt complete to me in a way WAH never does, even after a dozen watches.

Maybe it's that this film feels in some ways like an echo of Blue Velvet more than it's own thing? It's the first time Lynch felt tied to a thing he did before -- you get the sense he knew he'd righted the ship after Dune with Blue Velvet and he is clinging to what he did there, this time. I mean I can't knock what he lets my beloved Grace Zabriskie do in this movie... 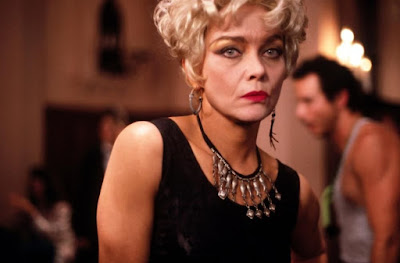 ... and yet at the same time the character of "Juana" feels like Dennis Hooper's "Frank Booth" redux in too many ways not to at least notice and acknowledge that. I guess WAH feels transitional to me. Blue Velvet was the punch through the sky -- WAH is him finding his footing on the crazy new landscape he'd made for himself. But there's so much to love.

That scene in particular is one for Lynch's Greatest Hits.
.
Who? Jason Adams When? 10:17 AM