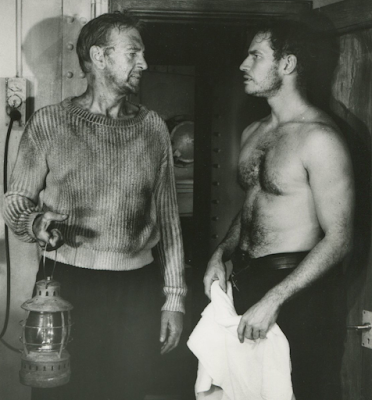 ... but I am still tickled by these photos of him beefcaking it up for Gary Cooper's benefit on the set of their 1959 sea-faring drama The Wreck of the Mary Deare. I am only human. This was Coop's second-to-last film -- anybody seen it? I have not. I do know that Alfred Hitchcock almost directed it but decided to do North By Northwest instead and... that was probably a good choice for Hitch to make. Although who knows what Hitch might have turned it into? I doubt he'd have wanted to work with Charlton Heston... 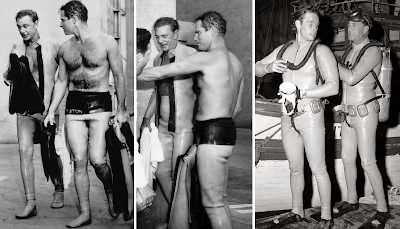 ... but it's well-documented that Hitch really wanted to work with Coop -- he tried to get him to star in both Foreign Correspondent and Saboteur in the early 40s but Coop turned him down both times! (Coop later said he regretted those decisions.) Anyway Mary Deare ended up being directed by Michael Anderson, whose best known film is probably Logan's Run seventeen years later. Or perhaps it's Around the World in 80s Days, which somehow won Best Picture in 1956, but who the hell ever thinks about Around the World in 80s Days anymore? (Enter the world's biggest ATWI80D fan.) 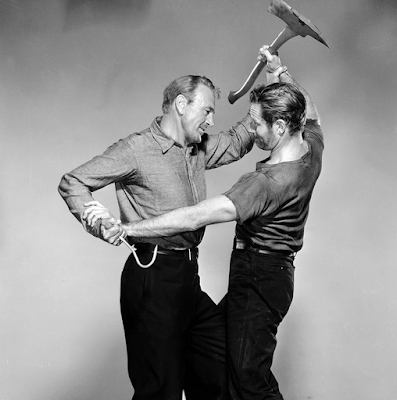 butttttt I do enjoy that unintentional but intentional gay scene in Planet of the Apes.

Or what about the homoerotic subtext in the beginning of Ben Hur...

I've seen Wreck of the Mary Deare. Pardon the pun but it's rather soggy. The story has potential but the direction is flat. Hitch was right to walk away, especially for something as great as North by Northwest.

Actually at the point this was made Heston was very liberal and involved in dozens of civil rights activities. I've never been able to figure out nor understand his radical turn to a mindnumbingly conservative and hateful political stance. I know that it cost him many, many friends-he and Paul Newman at one time had been good friends and fought for the same causes but after his turnaround Newman would have nothing to do with him even backing out of Hollywood events if Heston was among the attendees.

I'd be curious to know why certain actors later in life turn, as joel said above, to hateful politics. Especially the ones who had some charm earlier in their careers. I'm thinking of Dean Cain (who as someone just coming out of the closet I major crushed on in the Superman tv show) or Scott Baio (yeah I know he was a terrible actor to begin with) or James Woods (who choose some really interesting roles early in his career)