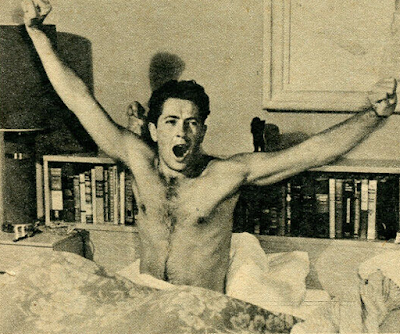 I didn't think I was going to find any new Farley Granger content this morning to mark the 95th anniversary of the actor's birth -- everything I first came upon I'd already posted, especially in this post right here. But then -- goldmine! On eBay I found a few pages of a cheesecake spread on Farley from a celebrity magazine of the times that tickled my fancy, et ceteras. I don't know which magazine and I'm not sure of the exact year but the copy mentions the 1950 film Our Very Own so I'm guessing it's around 1950. And what! 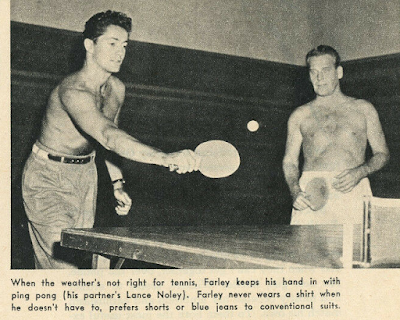 Farley hates to wear a shirt, you guys. Just hates it. Also I love the phrase "keeps his hand in" -- it never fails to sound absolutely filthy. As for Farley's ping pong "partner" Lance Noley I wonder if it might actually be Lance Nolley, who was an animator at Disney at the time. I still haven't read Farley's autobiography, I really need to; perhaps this Lance person is mentioned. Anyway... 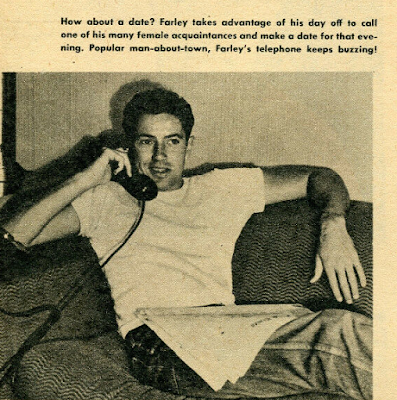 ... what's it matter because Farley was really very very busy talking on the telephone to all of those "female acquaintances" of his. I mean who else was going to tell Shelley Winters what pearls went with which dress? Hit the jump for the whole spread, it's a gas... 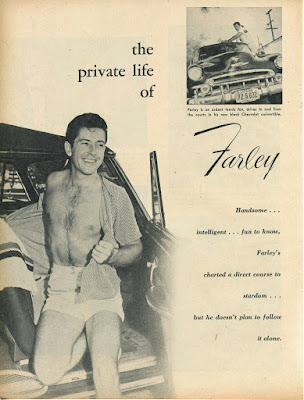 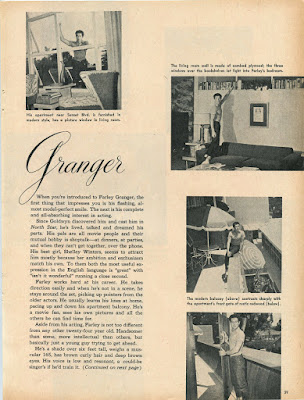 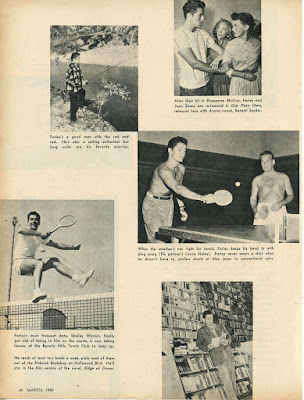 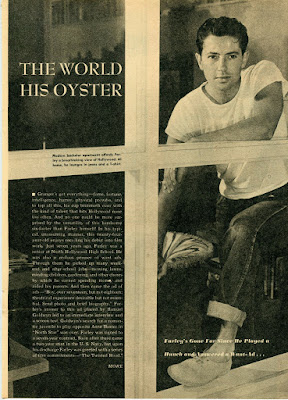 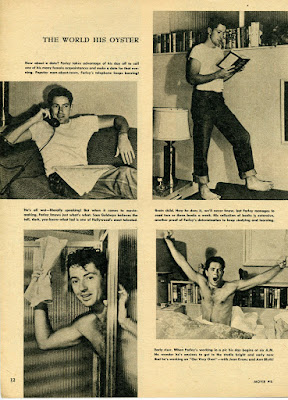 I have read his autobiography and it's quite good. I got it from the library, so if you don't want to buy it, check the catalogue and see if they have it. I also have a framed poster which I got as a Christmas gift decades ago. It's for Enchantment, a flop movie that is really lovely. It stars Teresa Wright, David Niven, Granger and Evelyn Keyes. It hangs in my bedroom next to a repro poster for
All About Eve, my favorite movie of all time.

Granger was a very sexy man. I love his performance in Strangers on a Train and in Enchantment.

Farley's book was good not great but included lots of dishy info. Perhaps not the finest actor but quite a beauty.

I came looking and hoping to find something about Olivia de Havilland who turned 104! today, maybe a top ten or some such.....maybe later, but Farley is nice compensation!

Joel -- I think if I did an Olivia post it would be really boring! I've never been a huge fans of hers, to be honest -- not enough that I've sought out her work outside of projects that didn't have something else going for them. I've never even seen The Heiress. I mean I love Captain Blood and Robin Hood and LADY IN A CAGE (sidenote: did anybody see the LIAC riff in this week's episode of Amy Sedaris' show? AWESOME) but those loves don't really have much to do with Olivia herself. I mean... she's fine. I'll just say it -- I think I liked Joan Fontaine better! Burn me at the stake if you must! ;)

Well we all have our faves and those we're cooler on.

I'm more team Olivia but I do like Joan Fontaine. Did anyone have a more whiplash inducing change in their screen persona? Joan went from tremulous naif in Rebecca, Letter from an Unknown Woman, The Constant Nymph etc. to brittle sophisticate in Born to Be Bad, Island in the Sun, Ivy and pretty much everything else after 1950 with no seeming middle ground.

The Heiress really is worth checking out. She's great in it but if you need a bigger pull there is an almost supernaturally beautiful Montgomery Clift as her caddish suitor, Miriam Hopkins fluttering and flouncing about as her Aunt Lavinia and Ralph Richardson being all kinds of a cold bastard as her father.

Ooh thank you for sharing these photos! Farley was a beautiful and underrated actor.