Do Dump or Mary: Little Men 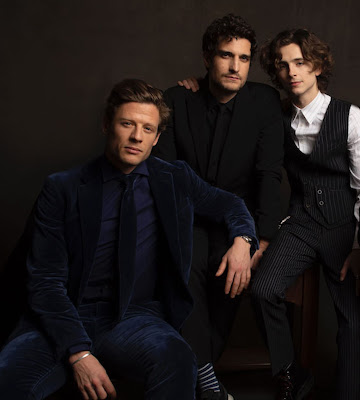 The actor James Norton celebrated his 35th birthday this past Saturday and as he did I in turn stumbled upon the above image (via) of him alongside his Little Women co-stars (male edition) which had somehow escaped my eyeballs last fall when it was that movie that was ravaging us instead of a plague. Oh to be ravaged by a quaint Louisa May Alcott adaptation once more! Them were the days. Anyway I did a search through MNPP's archives, fully expecting I did one of these at the time, but I didn't? I did not? Which is insane. And so today in Norton's honor I will right that wrong -- I ask you to in the comments "Do, Dump or Marry" your picks between Mr. Norton (see more of him here), Monsieur Louis Garrel (see more of him here) and Sir Timothée Chalamet (see more of him here). Now make like a March Sister and have at it...

This is the easiest DDM ever:

Do Norton
Dump Chalamet (he’s too skinny, it scares me)
Mary Garrell

DO Chalamet and DO so slowly, tenderly, and for a weekend
DUMP Garrell
MARRY Norton (with Chalamet as Best Man)

Move to Oklahoma and do a sister wives (brother husbands??) situation with the three of them. Call me Bill Paxton.

Dump Chalamet (or I'll be making love to a bag of bones!)
Do Garrell
Marry Norton

Do - Norton
Dump - Garrel
Marry - Chalamet (being married we can “do” it all the time!”

Do James Norton, dump Garrel and the little boy(ICK), marry the Vicar!

I would be riding Norton so long, I'd forget about the other two!

LOL you're gonna make me play too? Okay okay, fine!
This one is incredibly difficult for me too, dammit, but I'll play.

And hope that Timmy and I could still be friends after I dump him.

I'd wrap my legs so tightly around James Norton he'd either have to marry me or die. He'd better decide while I'm doing him. So James Norton for all of em.

This is such a great 'thread'.

I'd use it to weave a big quilt for a 3some for me Timmy and Jimmy.