A Song of 4K Fire 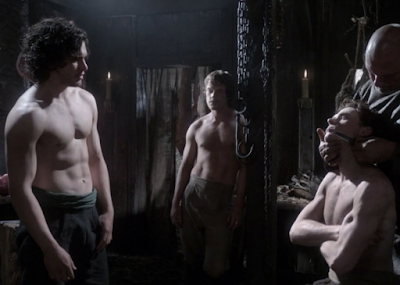 I, like a lot of you, was pretty disappointed with the final season of A Game of Thrones. So much that I haven't really even been able to think about the show since it ended -- it's hurt too much. Too painful! But today's news that the entire series is being collected onto an ultra-suave 4K blu-ray set just in time for the holidays -- it's hitting shelves on November 3rd -- has, well, got me thinking about Game of Thrones again. I loved the show for most of the time! Almost all of it! It doesn't seem right to write it off entirely, not when there was so much to love over the years...

... and now we can have all of these scenes in 4K? Sign me
the hell up! Hit the jump for the full press release... 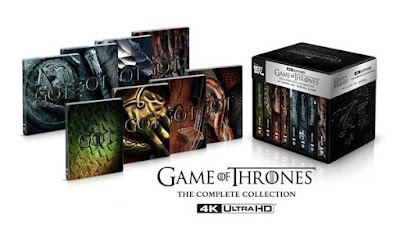 THE WORLDWIDE PHENOMENON
GAME OF THRONES®:
THE COMPLETE COLLECTION
FOR THE FIRST TIME EVER IN 4K ULTRA HD
AVAILABLE NOVEMBER 3, 2020

The Only Way to Watch the Complete Iconic Series in 4K Ultra HD,
Just in Time for the 2020 Holiday Season


BURBANK, CA, July 9, 2020 – The #1 selling home entertainment television series of all time*, and most-watched series in HBO history, Game of Thrones remains a blockbuster hit and cultural sensation. Now, for the first time ever, the entire series can be owned in spectacular 4K Ultra HD when Warner Bros. Home Entertainment releases Game of Thrones®: The Complete Collection on 4K Ultra HD Blu-rayTM on November 3, 2020. Featuring all 73 episodes along with over 15 hours of bonus content, plus Digital Copy (US only), this must-have set is priced to own at $254.99 SRP ($289.99 in Canada). Game of Thrones Seasons 1-8 are also available to own on Digital in HD via purchase from digital retailers.

Game of Thrones: The Complete Collection on 4K Ultra HD will also be available in an exclusive limited-edition version at Best Buy for $285.43 SRP ($320.43 in Canada). Containing the same episode and bonus content, all eight epic seasons will be featured in individual steelbooks and housed in a striking individually numbered metal case.

Based on the best-selling novel series by George R.R. Martin, Game of Thrones has earned a total of 161 Emmy® nominations and 59 wins, which are the most nominations and wins of any Comedy or Drama series in Emmy history. The Cultural Phenomenon also stands as HBO’s most-viewed program ever, with the final season averaging a record-setting 44 million viewers in the U.S.

“We are thrilled to offer Game of Thrones fans an in-home viewing experience worthy of the groundbreaking show with the long-awaited release of Game of Thrones: The Complete Series on 4K Ultra HD,” said Rosemary Markson, WBHE Senior Vice President, Television Marketing. “For the first time ever and unavailable anywhere else, loyal fans and collectors will be able to enjoy every extraordinary moment of this iconic show in eye-popping 4K Ultra HD with Dolby Vision HDR. Packed with over 15 hours of special features spanning all 8 seasons and a digital copy of every episode, this collectable set also makes a perfect holiday gift!”

The 4K Ultra HD discs of Game of Thrones: The Complete Collection will feature Dolby VisionTM HDR that dramatically expands the color palette and contrast range and uses dynamic metadata to automatically optimize the picture for every screen, frame by frame.

The 4K Ultra HD release includes over 15 hours of bonus features originally released on the 2019 Game of Thrones: The Complete Series and The Complete Collection (Limited Collector’s Edition) Blu-ray sets.

MORE THAN 15 HOURS OF BONUS FEATURES INCLUDING
· Game of Thrones: Reunion Special: A two-part reunion show shot live in Belfast with the cast, both past and present, hosted by Conan O’Brien and available exclusively on these complete series collections. The reunion special is assembled in segments focused on Houses Lannister, Stark, & Targaryen and concludes with the key players all onstage for their final reflections on the years they shared in Westeros and Essos.
· Game of Thrones: The Last Watch: A documentary by filmmaker Jeanie Finlay chronicling the making of the final season.
· Conquest & Rebellion: An Animated History of Seven Kingdoms
· Audio Commentaries, Deleted and Extended Scenes, Behind-the-scenes featurettes and much more from all 8 seasons!

We need Mad Men on 4k

Iwan Rheon taking his clothes off... (Haven't heard much about him lately -- I hope playing Ramsay didn't kill his career.)

I just...that last season killed my love for the show; I just can't make myself care. I find myself completely indifferent to whether Martin ever finishes the last two books. I really have no desire to read two more doorstops if it's all going to end with


Bran, the most annoying, boring, useless character in the series getting the throne for no discernible reason.

I feel the same about the updated “Battlestar Galactica”. It started so story, with lots of intriguing ideas. Buts it’s left-turn into crap came much earlier (half way into the 3rd season, with a final misguided 4th season). I stuck with it but find it impossible to go back and watch it again... knowing how the show runners & producers botched it. It had been a grounded scifi show about characters who were religious, then the introduced clap-trap Spiritual elements that could only be explained as “magic”. They fell in love with a character that frankly should have been killed off at the turning point, but instead literally turned him into an angel in the last episode.

I wanted to love GOT, but the pattern of each season leading you on with the promise of dragons and the walkers got too be too much. They would start the season with a teaser, drop another in the middle of the season, and then bring them back for a second at the end of the season. I stopped at season 3 and didn’t care that everyone was telling me the dragons and walkers finally came. I can only follow a carrot so far.