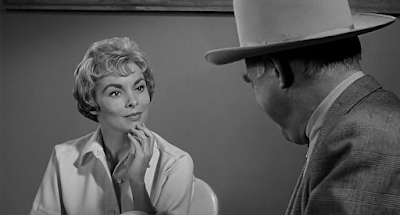 It's the 60th anniversary of one of the most monumental of horror films -- Alfred Hitchcock's Psycho premiered in NYC on this day in the year 1960, immediately exploding with word of mouth into the biggest hit of his entire career, not to mention a nasty lil' number that rewrote the rules for all of film-making while it was at it. It still shocks and surprises me today, even after having seen it countless times, and so today I wrote a little ode to it's (half) leading lady, Miss Janet Leigh, for my "Great Moments in Horror Actressing" series over at The Film Experience. Bow down to your queen, or else... 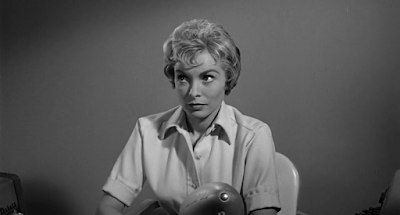 One of the greatest of all films. It had a central character who remains a mystery to me. Does anyone understand N Bates after all is said and done? I sure don’t.

Ms. Leigh came to visit the University of Montana when I was a senior there to promote the restoration of A TOUCH OF EVIL and to talk about her novels. She was so classy and very, very kind; I got a photo with her, but because I'm an ignoramus (and I was exceptionally nervous), we took it standing in front of a window. Derp.