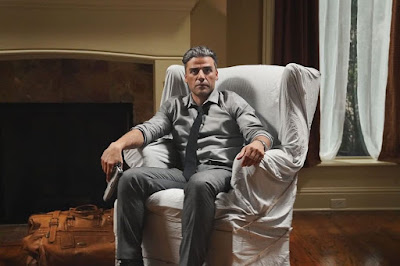 Well speak of the devil -- and the Devil wishes he had a Chunky Bum like Oscar Isaac -- just yesterday we shared several Oscar News Items Of Note with you, one of which was a poster for Paul Schrader's upcoming movie The Card Counter. And today, devil be damned, we have our first official picture from the movie, which has Oscar playing a former soldier who gets into some shit alongside Tye Sheridan. Hence the gun, one imagines. All I care is will this be the movie that finally unleashes the full Chunky Bum on the world? Paul Schrader might not seem the type but he did direct America Gigolo once upon a time, so... Anyway we're tired of waiting, Oscar. Just feed the beast.
.
Who? Jason Adams When? 12:32 PM