Weird explosion of Oscar Isaac news in the past twenty-four hours -- we don't mind! Especially when there are mustaches and rubber gloves involved. Which...

... there are. But it's a lot to cover so let's dive right in. Firstly (and if you follow me on Twitter you already saw this one) -- Oscar has starred in a short film directed by his wife Elvira Lind called The Letter Room. More importantly Oscar Isaac's Mustache has starred in a short film called The Letter Room. I posted some images and a poster on our Tumblr but there's a trailer too, which you can watch at this link.

Dunno how or when we'll ever see that but when the day comes I will let you know. Probably. Unless I'm dead in which case I apologize in advance. Next up! Oscar has signed on to two big new projects this week. He is going to co-star in James Gray's follow-up to Ad Astra to be called Armageddon Time alongside a big cast of big names including Robert DeNiro, Anne Hathaway, Cate Blanchett, and Donald Sutherland. Unfortunately it's not a disaster movie, at least not in the literal sense -- it's a coming-of-age movie based on Gray's own Queens childhood, set during Ronald Reagen's presidential campaign circa 1979-ish. I think Reagan winning the Presidency counts as its own sort of end-of-the-world scenario.

The other project Oscar's signed up for is Ben Stiller's next film called London, which will be an adaptation of a new short story by The Snowman writer Jo Nesbo. [Insert Harry Hole joke here.] We don't know anything about this one besides all the names attached, but Stiller's real hit or miss for me, at least when he's being serious -- I didn't watch any of that Dannemora TV show he won a bunch of awards for but I tend to prefer Zoolander goofball Stiller over his more serious predilections. (thx Mac) But wait! There is yet more! 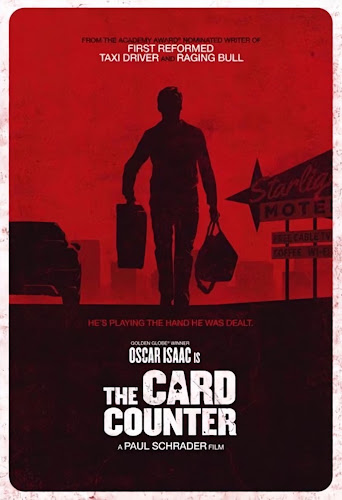 That there is the first poster I've seen for The Card Counter, Oscar's movie with writer-director Paul Schrader of Taxi Driver and more recently First Reformed fame. The film also stars Tiffany Haddish, Willem Dafoe and Tye Sheridan, and has Oscar playing a former soldier and current gambler who's trying to reform young Tye, who's seeking some sort of vengeance. Oscar Isaac wearing a uniform while mentoring Tye Sheridan sure sounds like a movie I'll watch! Here's a photo of Oscar with Schrader & Dafoe on the set: 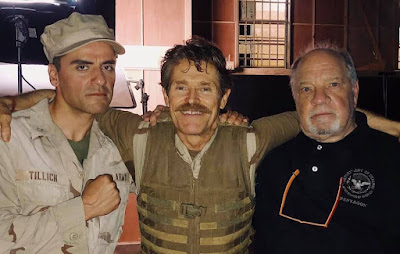 I need that short now. I love him so much!