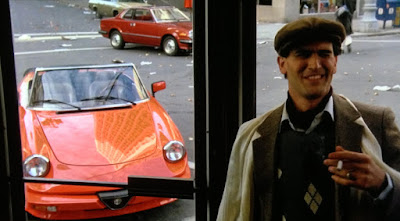 Nancy: I'm not that kind of girl!
Renaldo the Heel: Well, with a
little practice you could learn to be.

Sam Raimi directed Crimewave (which was written by his roomies, the Coen Brothers!) four years after the original Evil Dead movie and two years before its sequel -- Has anyone seen it? It's one of the few Sam Raimi movies I have never seen; I should totally get on it right? I believe Bruce Campbell's role is on the smallish side -- he's not the lead -- but because we're Evil-Dead-quote'd out at this point we're using this movie to wish Bruce a happy 62nd birthday today!
.
Who? Jason Adams When? 11:01 AM

Back in my late 90s obsession, Crimewave was one of the more difficult Bruce movies to obtain on VHS.

It's Coen-appropriately goofy, and Reynaldo is a minor character.

It’s...uneven, let’s just say. Studio meddling added weird sound effects and funny voices. But there’s a fair amount of wonderfulness in it, you should still watch it.