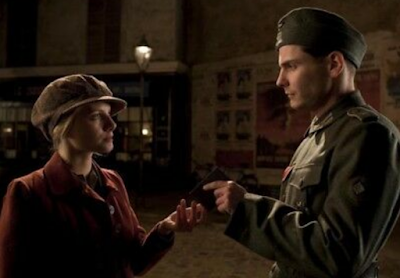 Zoller: Merci for hoisting a German night.
Shosanna: I don't have a choice, but you're welcome.
Zoller: Do you chose the German films yourself?
Shosanna: Oui.
Zoller: Then my merci stands.
I love the Riefenstahl mountain films, especially,
Pizu Palu. It's nice to see a French girl
who's a admirer of Riefenstahl.
Shosanna: "Admire", would not be the adjective
I would use to describe my feelings
towards Fraulein Riefenstahl.
Zoller: But you do admire the director.
Pabst, don't you? That's why you included
his name on the marquee.
Shosanna: I'm French.
We respect directors in our country.

A very happy 42 to Daniel Brühl today! I just saw a trailer for the second season of The Alienist on TV earlier this week, which got me fairly excited as I loved the first season -- did you? The second season, subtitled The Angel of Darkness after Caleb Carr's second book, will premiere on TNT on July 26th. I hope our dour detectives get even pervier this go around -- I demand more of Daniel Brühl demanding that Luke Evans put on his boots. Here's that trailer: