An Angel in Tweed 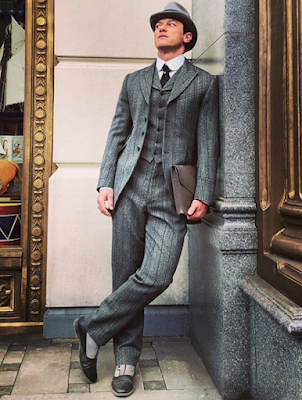 Luke Evans posted that shot from the Budapest set of the second season of The Alienist this morning, which reminds me that The Alienist is getting a second season, hooray! I think I knew that already but I never posted about it, so this presents a fine opportunity -- the second season is reportedly based on Caleb Carr's second book, the slightly less successful Angel of Darkness, which will have the nascent scientific detectives, including Luke's co-stars Dakota Fanning and Daniel Brühl, tracking a murderous governess. Baby danger! Were any of you fans of the first season? I was very much one, but then how could I not be...

I had read the Alienist years ago and started watching but found it difficult from week to week to keep everything straight because I had forgotten a lot of the book. So I dropped out. Then I went back to it when it was available complete for streaming and found it an immensely satisfying binge. I also read Carr's sequel but at this time remember nothing about it so I'll probably wait and binge it after it's all over.

I absolutely loved it and thought the three leads had terrific chemistry together - but Dakota Fanning totally owned it. It was nice to see Luke Evans actually acting for a change; he showed great sensitivity and vulnerability in this role. And those costumes...