Death To Any Other Mother! 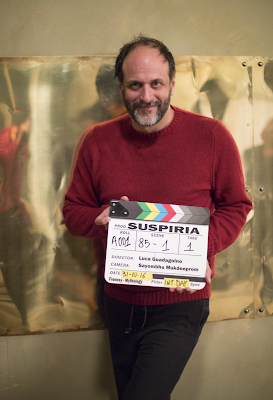 Listen. If you guys ever have a secret that you need kept, all I am saying is I can keep a fucking secret. I am trustworthy like you have no idea. Because I have known for two weeks, TWO EXCRUCIATINGLY LONG WEEKS, that my favorite podcast the Gaylords of Darkness -- hosted by Final Girl Stacie Ponder and the exquisite Anthony Hudson -- would be hosting the director of the Suspiria remake, one Luca Guadagnino, and the writer of the Suspiria remake, one David Kajganich, for their latest episode.

This Wednesday we’re returning with a new episode on SUSPIRIA! But this time around we’re joined by director Luca Guadagnino & screenwriter David Kajganich. We chat revolution, representation, and much more. Keep up the fight, Bannions and Blanc-ites! pic.twitter.com/4vgVSve0RJ
— Gaylords of Darkness (@GaylordsOfD) June 15, 2020

I imagine holding this information in was tough for Stacie & Anthony as well but they actually got to speak to Luca & David so fuck them, who cares how they felt. I am the victim here! In all seriousness if you have ever listened to Gaylords at al then you've heard them talk, and exquisitely at that, about the Suspiria remake -- they've been one of the film's great champions, and rightfully so, given it's a goddamned masterpiece; better than the original there I said it.

I mean I've basically been saying that since seeing the movie myself in 2018 -- here's my own review -- when it placed #2 on my films of the year, and honestly I've been seriously considering switching it and Roma around ever since. I love Roma, Roma is exquisite, but I haven't watched or had the desire to watch Roma a dozen times since 2018 like I have with Luca's film. I can't get enough of it. So knowing two of my favorite people are about to loose their lips to its makers????

Tear my chest open and call me the Mother of Sighs.
Gaylords drops their new episodes every Wednesday,
so check out their site in two days for this unbelievable thrill.
.
Who? Jason Adams When? 12:53 PM

There was something particularly relatable to the film’s nightmarish ending. Seeing it reminded me of some of the images from my sleep, from long ago. Not that I dreamt of witches, but the overall feeling and conceptual look. Going down into a dark primal space with otherworldly, dark figures. It was slightly deja vu-y. I never woke frightful from the dreams, but fascinated.