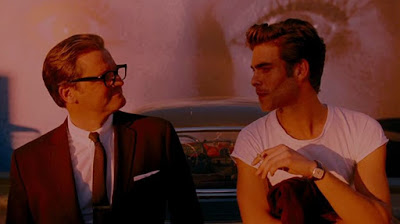 Carlos: No one has ever picked me up
and not wanted something.
George: I think you picked me up.
This is kind of a serious day for me.
Carlos: Come on. What could be
so serious for a guy like you?
George: I'm just trying to get over
an old love I guess.
Carlos: My mother says that lovers are like buses.
You just have to wait a little while
and another one comes along.

A happy 35 to model turned sometime actor Jon Kortajarena today! Although his IMDb page has more acting credits than I realized he'd have I still think he models more than he acts, and why wouldn't he, with that face, that torso, that... well that everything. (See more photos of him on our Tumblr.) 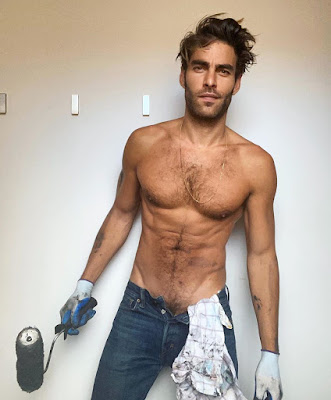 But the last thing we saw from him was actually an acting thing -- he had a nice (gay again) role on an episode of Tales from the Loop, Amazon's low-fi sci-fi series I recently championed here on the site. Have you watched that yet? God I love it. 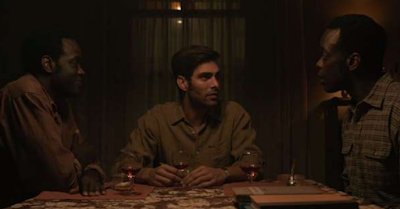 Anyway nothing I have to say about Jon's career, whether it be modeling or acting or being paparazzi'd out and about with Luke Evans for several years way back when wink wink, nothing I have to say will sum up all of my feelings quite like the video that Miguel Angel Silvestre posted today for Jon's birthday of the two of them vigorously brushing their teeth together, so I'll let it do the talking for me.


Happy birthday to my dear friend @kortajarenajon My brother from Bilbao Felicidades teteeeee❗️❗️❗️
A post shared by Miguel Angel Silvestre (@miguelangelsilvestre) on May 19, 2020 at 1:09am PDT

One of my fantasy is to be his barber...

Tales from the Loop was great!!