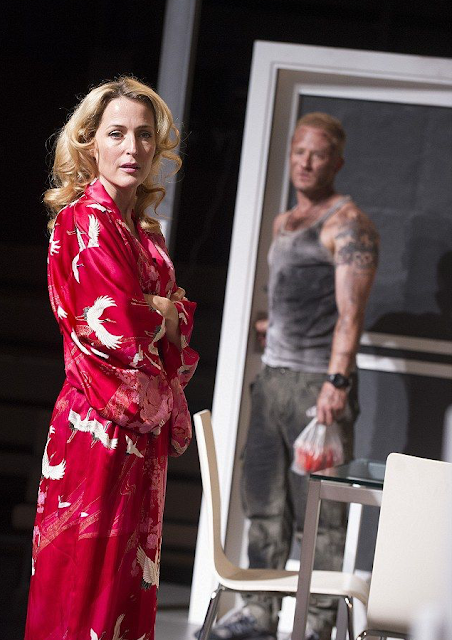 Tremendous news today -- on May 21st at 2pm the National Theater will be live-streaming the 2014 production of Tennessee Williams' play A Streetcar Named Desire that starred Gillian Anderson as the faded belle Blanche Dubois and Ben Foster as the monkey man Stanley Kowalski. (thx Mac) I saw the show when it transferred to Brooklyn in 2016 and posted about it, calling Gillian's work the greatest stage acting I'd ever seen, and I maintain that here four years later -- I'd always liked Anderson as an actress but this night was quasi-religious. She blew me away, so much so that I went back and saw the show two more times, and so much so that I'm actually a bit shaken right now reading this news. It's the best news I've heard inside this miserable year anyway, by far.

And I recommend you pay attention to the National Theater's website these days (specifically their YouTube channel) as they're gifting us with tons of free content; literally right this second they're streaming Ralph Fiennes and Sophie Okonedo as Antony and Cleopatra, and coming up in June they're going to show Tom Hiddleston's Coriolanus. They need to show Angels in America and then they need to show Jack O'Connell's mostly naked Cat on a Hot Tin Roof performances next!

We’re so excited to announce new streaming titles for #NationalTheatreAtHome on YouTube:

Couldn't agree more about Anderson in "Streetcar." Saw it live in Brooklyn and on a movie screen from NTL and in both instances I was stunned. This is one for the ages and the filming actually captures it well (she clearly knows well how to pitch for the camera slightly differently).

Such good news! And thankfully, they keep the shows up for a week, so you have some time to catch it.

I am going to have to check Ms. Anderson's performance, then.
Thnx for the tip!

thanks for the heads up. this should be great.