I Great You Great We All Great For The Great

I guess that things happen in this here the first trailer for Hulu's new series The Great starring Elle Fanning and Nicky Hoult that aren't Nicky Hoult wearing pearls while twirling a knife, but I blacked out after that happened and it's all I can see now. With my eyes open, with my eyes closed, Nicky Hoult wearing pearls while twirling a knife has literally seared itself like a firebrand onto my eyeballs -- if you press your face right against that gif above you'll get what I mean. That's it! I am typing this post only through magic and sense memory.

Tomfoolery aside we have spoken of The Great already one time, right here back in January when the very first teaser dropped -- this series is from the writer of The Favourite (which makes total sense) and has Nicky playing Peter the Emperor of Russia and Elle playing his new bride Catherine, yadda yadda you can find out all the salient plot points in this here new trailer. As long as you are able to retain anything except Nicky in pearls brandishing a big weapon, I mean...
.


.
The Great drops on Hulu on May 15th!
Safe to say I will fucking be there. With pearls on! 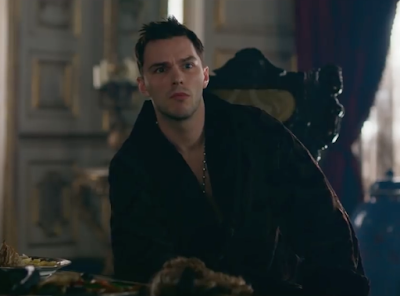 Looks fun. I can’t decided which is prettier, Elle or Nick?

Is he out already?