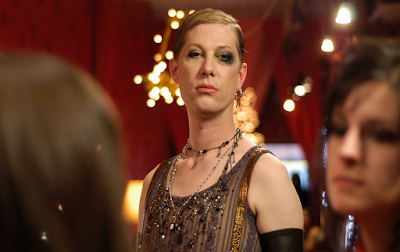 Justin Bond: As my dear departed friend Lotus Weinstock used to say: "I used to wanna change the world. Now I just wanna leave the room with a little dignity."

A happy 57 to director, actor, and legend John Cameron Mitchell today! I finally started watching the second season of Shrill this week so JCM as an actor is at the forefront of my mind -- it took me a second to go oh right, he's also one of our greatest living directors too. True he's only made four feature films but I adore all four of them -- yes even How To Talk To Girls At Parties and if you don't you're off-base, baby, it's a space-age punk-frilled blast.

As for Shortbus I'll admit I haven't seen it in a decade -- well I have watched a couple of scenes, you know the ones, here and there -- so I'm not sure if it holds up... it does seem very much a movie of its precise moment. But I imagine in that sense it'll at least age into a nice time capsule. With self-sucking. The best sort!

What do you think of s2 of Shrill? I loved the first season and for some reason don't care at all about what's going on in s2.

I have heard that from a few people, but I've only
watched the first episode so far. So we will see!

I watched "Shortbus" again about a month before all this shit started, and it held up for me. I think it will be even more powerful if things ever get back to a semblance of normality.

Shortbus is in my top 10 of all time favourite movies. As all good dramedies it balances hilarious and heartbreaking moments very well. It has so many great scenes, dialogues and characters... like Sofia, Severin and Justin Bond. I especially ship the "love square" between James, Jamie, Ceth and Caleb.