Because I haven't seen it I have been putting off for ages doing a proper post about Paul Newman in the 1963 movie The Prize -- it's one of those cool-baby early 1960s comedies that sees a handsome fella grooving on a bunch of groovy ladies; it seems to me to be the sort of movie that all the guys in Mad Men would've worshiped. In 2012 I did do a little post here with a couple of pictures, ones from the scene where Newman infiltrates a hotel ballroom gathering of nudists (as one did in the 60s) and... well, now you understand why I want to see the film.

Try to be more like the large nudists trying to strip Paul Newman naked that you want to see in the world pic.twitter.com/K4PiHOJn2I
— Jason Adams (@JAMNPP) April 16, 2020

But I still haven't seen it! I suck! But suckage aside something has changed, something that means I had got to do a post immediately, and that something is the following new-to-me photo has been making the rounds: 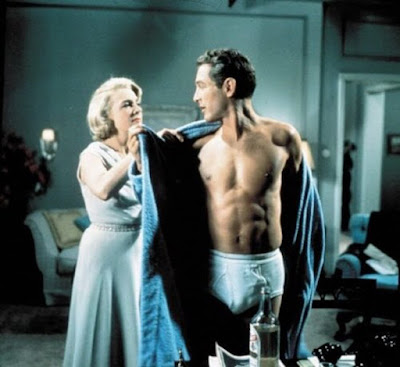 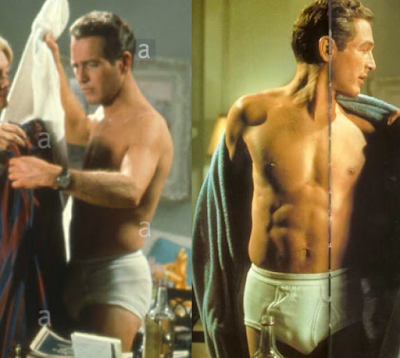 What wonders there are in this world to be had! The thing about these photos is they are set photos, and you don't actually see Paul Newman wearing any tighty-whities in the movie itself... as far as I can tell -- again I refer you to the fact that I haven't actually sat and watched this film from start to finish just yet. This is what this specific scene in the film, which I did watch, actually looks like:

It's still Paul Newman being saucy while implying stripping naked! So not too shabby! But if there are more set photographs of those blessed tighty-whities out there I can only hope they will be uncovered, because obviously. For now we'll have to make due with those seen above... and I don't know about you but I, personally, can certainly "make due" with those. I can make a lot of due with those. Due has been all over the damn place. Hit the jump for a few more photos from the shooting of The Prize that I managed to scavenge up around the web... 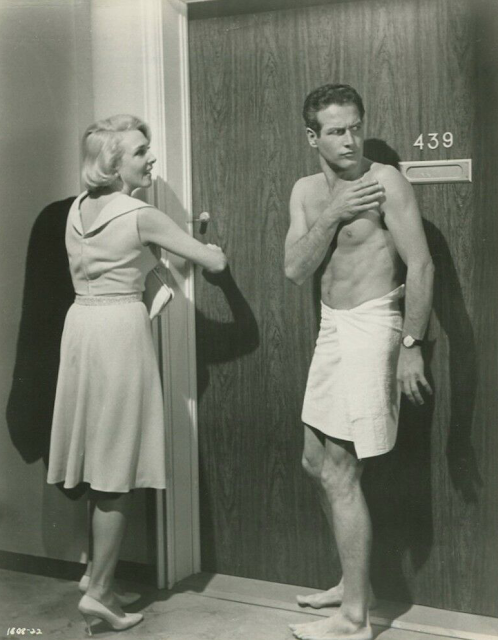 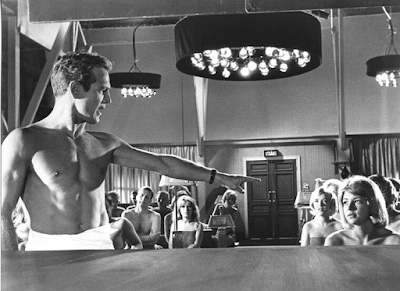 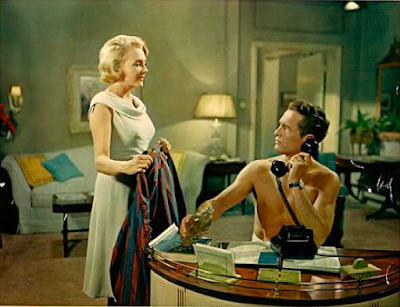 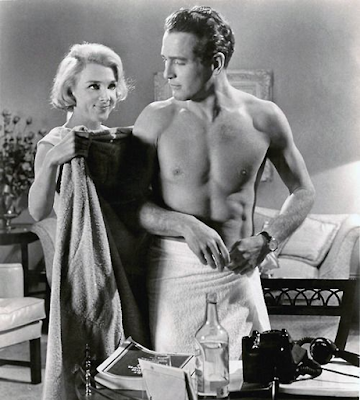 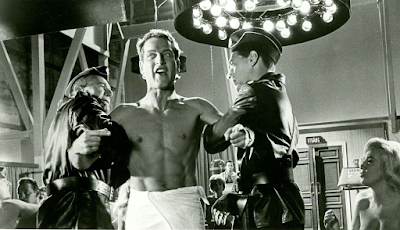 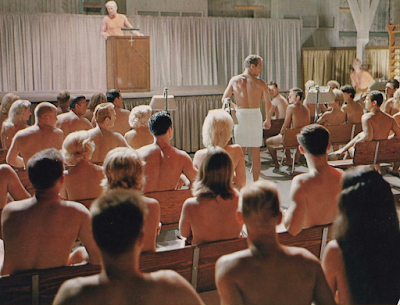 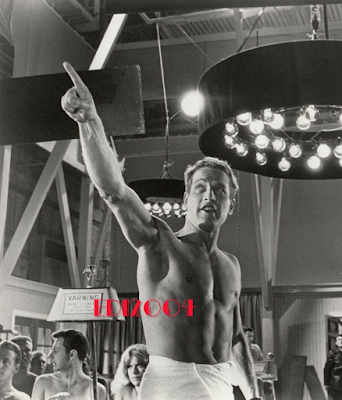 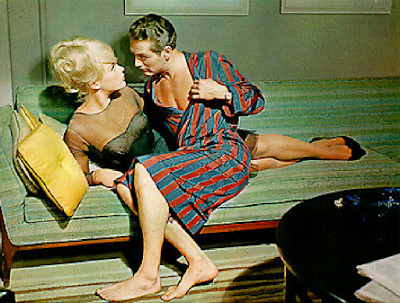 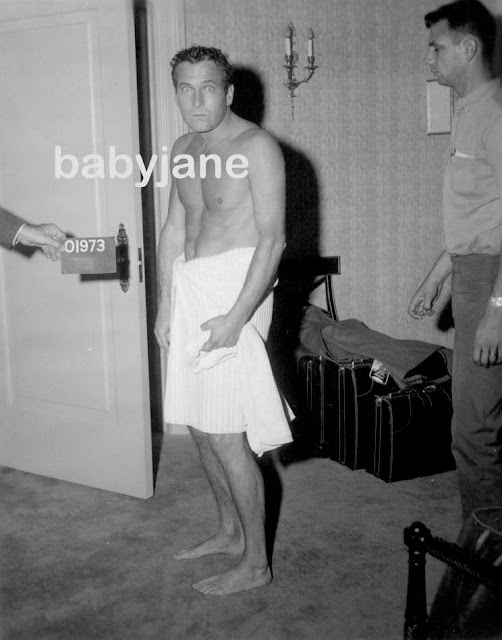 OHHHHHHHHHHH!!! I love, love, LOVE The Prize!!! Those scenes of Paul in various states of undress are fantastic of course but the movie as a whole is wonderfully entertaining!

It's got a comic element, the woman in that scene with Paul, Micheline Presle who plays Dr. Denise (and because she's French it's pronounced D-knees) Marceau is fabulously wry and cunning as she uses Paul as a ploy to make her straying husband jealous-a fellow doctor with a knockout "secretary" who he has brought along to pick up their Nobel Prize!

But at heart its a mystery, part of which brings Paul to that hotel with the nudists. It's got a phenomenal cast too. Kevin McCarthy, Diane Baker, Elke Sommer (I'm not sure but I don't think she wears anything that isn't silk or satin) and to top it all off freaking Edward G. Robinson in a dual role!!

As good as Paul looks undressed he also rocks a tux at one point!

You won't be sorry when you track it down, it has a very Hitchcock feel to it as well as all the gorgeous people and magnificent views of Stockholm.

good god this man. all these decades later still one of the most delicious things the movies were created to showcase.

When I was working at the Guthrie, Leonard Nimoy came to do his solo play, Vincent, about Theo Van Gogh. His dresser had dressed Richard Burton in Hamlet and Paul Newman in Baby Want a Kiss. He told me that he'd seen Newman naked and was going crazy because of Newman's charisma and sensuality. Finally, he couldn't stand it anymore, and he asked Newman if "can I please suck your cock?" Newman, he told me, was flattered and thanked him, but "it's only for Joanne (Woodward)."

The only thing I remember about The Prize was it was a complete bastardization of a pretty good novel and I was so horrified about what they had done to the book I barely registered Paul Newman and nudists.

Just my two cents, but Paul Newman was and still is arguably the hottest actor of all time. Ripped as a Greek god, he can drown you with his infinitely steel blue eyes. I instantly melt whenever I see pictures of him being fully bearded.