5 Off My Head: Weathering These Storms 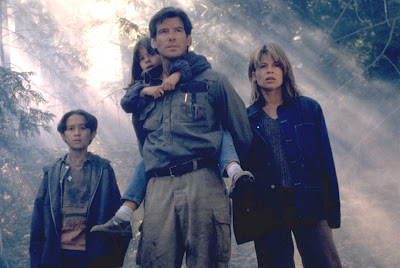 Even in the middle of a real-life Disaster Movie it turns out I'll get sucked into a Disaster Movie if it's on TV, even if it's a terrible one I have nevertheless seen a billion times before -- look no further than the hour I spent with Dante's Peak, beloved Dante's Peak, just the day before yesterday.  (Is that the prequel to The Day After Tomorrow?)
.

Worse than the fact that I have gotten sucked into Dante's Peak for the five thousandth time, I just cried a little when the guy went over on the bridge? END TIMES
— Jason Adams (@JAMNPP) March 29, 2020

.
As a lifelong devotee of this often terrible -- or at the least terribly derivative -- genre, you come to know the tropes... hell you come to rely on the tropes. They're part of what makes the experience so satisfying time after time after time, decade after decade after decade. People often complain about the gooey moral centers of Disaster Movies -- the way they go out of their way to center and confirm the strength of the old-fashioned family unit, Dad and Mom and Son and Daughter and Dog, can't forget the dog.
.
.
There's always the generic family drama that you don't care about, you just want to get to the Good Stuff of the earthquakes, tidal waves, volcanos, the alien attacks and Sharknados. And if you go all the way back to the very first proper Disaster Movie, 1933's Deluge, this is still the case -- it turns a story about earthquakes and tsunamis devastating the entire globe into a love triangle! Of course...

... Deluge also ends with the extra third of that love triangle walking into the ocean to sacrifice herself, so this history is, uhh, complicated. Anyway in my forward-thinking brain those criticisms of conservativism are correct. And yet... my lizard brain don't give a hoot -- my lizard brain loves this shit. Save everybody and give me a damn gooey ending dammit! Reunite everybody in front of a sunrise, flags waving, generically patriotic music blaring obnoxiously as hugs happen in slo-mo -- I want all of it. That said some of these movies have done more with the tropes than others, and here's a list of some of my personal faves.


.
Mars Attacks! -- This list you're reading right now exists because I started thinking about Tim Burton's Mars Attacks! and its glorious deranged ending. Granted Tim Burton's Mars Attacks! has a gloriously deranged beginning and a gloriously deranged middle part to go with that gloriously deranged ending. But that ending! It's exactly what I picture the end of our current situation will be like. We all step out into the outdoors from some dark cavern, blinking our eyes in the too bright sunlight, a bunch of woodland creatures fly up, Annette Bening will be there in a wig and Tom Jones will start singing. That's what is going to happen right? I was promised Tom Jones.

Gravity -- I thought about including one of the most bombastic examples of the ending I described up top, like say your Armageddon ending (which is like 75% slo-mo and flags) or your Independence Day, which has people of every color across the globe yee-hawing over the downed saucers (which probably crashed on and murdered millions in the process). But I prefer Cuaron's little spin, with Sandra Bullock clutching that weirdly primordial patch of wet clay -- he shoots our natural soil like we're in a Star Trek episode, making home feel very foreign. Also for all of Gravity's emphasis on Sandy's astronaut being a Mother this ending does stand apart from the usual tropes in how internalized it keeps itself -- all that matters is this woman manages to stand and take a step, and another.
.
.
Titanic -- Fuck you, haters! This is my list and I'm gonna include that old broad making an "Oopsie!" sound as she throws a priceless artifact into the ocean if I wanna, dammit. In all seriousness I will defend Titanic to my dying breath -- which hey might be tomorrow, so maybe this is it! -- and I love the sequence where the camera floats through the submerged ship and it comes to life and we see Jack and Rose dancing down there together once again. Yeah this is more "bittersweet" than "happy" but Rose gets a good life with horses and shit, and I'm crying just typing this, so fuck you! Heartless monsters!

The Impossible -- While I think the above scenes from James Cameron's and Alfonso Cuaron's epics are wonderfully acted it's the final moments from director J.A. Bayona's 2012 film about the 2004 tsunami that gets the Gold Medal performance-wise for Naomi Watts' deeply affecting portrait of terror and grief and relief and every other fucking thing that washes over her in these final moments.
.

.
And extra bonus points for Naomi brightening
our current situation with cake. We all want cake.
.
.
Starship Troopers --Starting and ending this list on subversive notes seems about right, and it doesn't get much more subversive than Paul Verhoeven's Fascist Satire about gorgeous fuckable human beings gleefully conquering and torturing all those filthy foreigners -- to the winner the spoils, ya goddamn buncha bugs! Whaddya wanna do, live forever???

What are your favorite Disaster Movie Endings?
.
Who? Jason Adams When? 12:25 PM

What, you didn't include "The Day After Tomorrow" with those two hotties Dennis Quaid and Jake Gyllenhaal as father and son? There's even a fan service scene of Dennis in just his boxers.

I don't hate this version of Titanic, I'm not crazy about the pre-collision part (outside of the set & costume design and the women in the cast) but once they hit the berg it's gripping and I am also a sucker for that watery trip through the wreckage as it comes to life again. As Titanic movies go I prefer the Barbara Stanwyck/Clifton Webb one (and it has that gut wrenching farewell between the two of them before she gets in the lifeboat) but it just ends with a long shot of the lifeboats.

My choices are more old school:

The Towering Inferno (1974)-The wrap up scene on the stairs of the building with Steve McQueen, Paul Newman and Faye Dunaway giving you all that disheveled Movie Star Glamour.

The Poseidon Adventure (1972)-though I'll be forever bitter that Stella Stevens's fabulous Linda Rogo doesn't make it but when they finally get to out it's very satisfying.

San Francisco (1936)-To paraphrase Judy Garland's intro to the song-"I never will forget Jeannette MacDonald...just to think of her it gives my heart a pang...I never will forget how that brave Jeannette just stood there in the ruins and sang....and sangggg." It's incredibly hokey but still moving somehow.

Independence Day (1996)-Four of the main characters walking joyfully together as pieces of an alien spaceship burns up on entry and Will Smith gets that last quip in is silly as hell but it never fails to make me smile.

The gif at the end of the post...what movie is that?

I would have said "The Day After Tomorrow" too!

Am I the only one who sees the evolution of the species/mankind in the ending of Gravity?

I'd also like to know what movie that is in the last gif.
It's seconds long, but it really makes me want to watch whatever it is. Looks hilarious :)