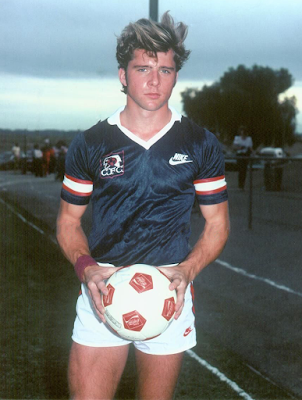 ... kicking it around with Maxwell Caulfield.


Yes yes Criterion is releasing Pier Paolo Pasolini's masterpiece Teorema on blu-ray today and that's real neat and everything, but there's an even more important cinematic manifesto now hitting the streets that it's my duty to call each and every one of your attentions to -- Bob Yari's seriously weird Mind Games from 1989, starring Maxwell Caulfield as a sexily psychopathic Psych major out to tear down the family unit, all in the name of science!
.

This movie just started with a little boy finding a topless Maxwell Caulfield in the woods, who beckons him over to teach him how to play the flute, and when the boy's father finds them there is a lot of talk about the boy being a natural flute player, and WHAT AM I EVEN WATCHING pic.twitter.com/ZnlTMV0dKT
— Jason Adams (@JAMNPP) February 15, 2020

.
You could actually call Mind Games the trash take on Teorema -- and please, quote me on that. Just like Terence Stamp's so-called "Visitor" Maxwell's character Eric insinuates himself into the lives of every member of this family that he meets, figuring out exactly what they need at that moment in time. He makes (way way way too friendly of) buddies with the little boy, he seduces the unhappy wife, he... well I kept thinking he was seducing the unhappy husband too, but I think Maxwell Caulfield is just so goddamned pretty that comes off in his every interaction.
.

Ten minutes in and Maxwell Caulfield is already running around in a speedo, this is my new favorite movie pic.twitter.com/VJFOPFiFsk
— Jason Adams (@JAMNPP) February 15, 2020

.
There's actually a really funny bit on the making of documentary on the Mind Games disc where the actor who played the little boy talks about watching Maxwell walk into rooms and turn every person, including his own real-life mother, into a quivering pile of Jell-O. I believe it! (Besides that doc the remaster of this flick is the main reason to pick this up -- it's never been available looking this crisp. We truly live in an insane golden age where movies of this, you know, caliber, can get this kind of upgrade.) 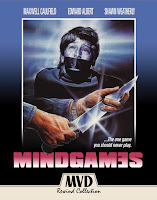 Anyway even though Pasolini -- and no, I can't believe I'm comparing these two movies either, what a world -- shows The Visitor's visit to be pretty destructive to the family unit that doesn't really ever seem to be The Visitor's intent; he reads as benign. It's their crippling anxieties and self-doubts that ruin them. Not sos  with Eric, who's purposefully out to manipulate these people into their worst instincts and destroy their senses of decency as much as possible. It's a real sleazy flick with some real questionable content, including an, uhh, investigation into the nurture versus nature debate over homosexuality. And yet... well let's just say that Maxwell Caulfield turned my brain into a quivering pile of Jell-O, and I found the movie a real easy sit. Trash Teorema for the win!
.
Who? Jason Adams When? 1:20 PM

OMG... before I knew what it all meant (The obsession with Menudo, New Edition and Madonna), I spent the 80s watching Grease 2 ad naseum. The Maxwell thirst was real!

I saw him onstage off-Broadway in a show called Tryst, which promised full-frontal nudity. Alas, while Max took his shirt off, it was the woman who got full-frontal. Still, it was a pleasure to see him onstage. He and Juliet Mills appear to have a truly happy marriage!

He is such a beautiful man!

Did a google search of mnpp to see what you'd said about Il Visitor (1979/80) - there are some fantastic ways not to die, in it - but alas nothing. This came up though, so I'm very happy still!