I'll Be Your Victim Anytime, Yahya

Coming at you a couple of hours late thanks to the doctor's appointment I just finally got out of -- I was seriously sitting in the waiting room looking at everybody talk about this on Twitter and weeping, openly weeping -- here at last, my post on the new Candyman trailer. I'm sure y'all were waiting to hear what I had to say before you formed your own opinions! The most notable takeaway for me was, do I start the post with the shot of those beautiful bookshelves (perhaps a call-back to the original film's beautiful bookshelves?) or do I start the post with...

... shirtless Yahya Abdul-Mateen? Well there, I started with both. Seriously those shelves! (And by "shelves" I might mean "Yahya's shoulders" -- you'll just have to guess.) Anyway! The trailer's good, right? In a weird unplanned coincidence I just this morning finished listening to the Gaylords of Darkness podcast episode about Bernard Rose's 1992 film so I am feeling like I might need to re-watch that right away? Even though I did just re-watch the movie last August when I wrote about Kasi Lemmons performance... you really can't watch Candyman too many times...

... which is probably the biggest question mark (I almost said "strike against" but I won't go that far yet, sight unseen) with regards to this here remake -- the first film holds up in 2020, not just remaining terrifying but for asking questions about race relations that seem totally fresh right this minute. It's a horror masterpiece, and that's a big hill for a new movie to climb. But if you've seen the original... 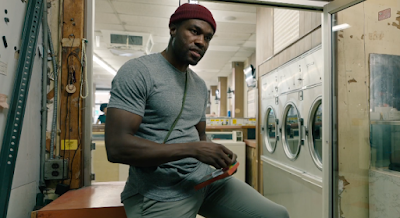 ... I'm curious at what point it snapped into place that, "OHHH SHIT that's what this is about! Why didn't I realize that before?!?" feeling. I'm trying to keep away from spoilers for the original and possibly I guess for this one, but I feel dumb it didn't occur to me that what appears to be the link between the two films is the link between the two films. It seems real DUH right now. Anyway here's the trailer:
.


.
We posted the poster earlier this week at this link;
the movie is out on June 12th. What do we think?
.
Who? Jason Adams When? 1:11 PM
Labels: Anatomy IN a Scene, Clive Barker, gratuitous, horror, Paperhouse, Shelf Fetish, trailers, Yahya Abdul-Mateen