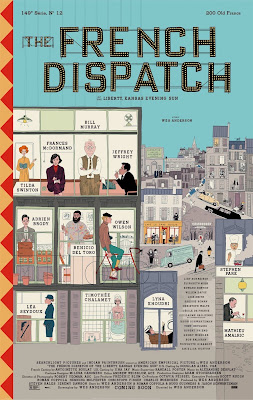 The first poster for Wes Anderson's forthcoming The French Dispatch of the Liberty Evening Sun (which we'll all refer to as French Dispatch from now on probably) was released today and you're definitely gonna want to click that to embiggen as it's an adorable little marvel -- shocking nobody acquainted with anything Wes Anderson related -- of boxes inside boxes and character's in lil' vignettes. I may sound sarcastic here but I am a Hardcore Wes'ser, on Team Him since time began, and I am into it. I am especially into Timmy's square...
.

Hey remember how Wes Anderson's THE FRENCH DISPATCH got Rated R for GRAPHIC NUDITY cuz that's what I'm sure thinking about zooming in on Timothee's square in the movie's poster pic.twitter.com/Tl5rAaYIwr
— Jason Adams (@JAMNPP) February 11, 2020

.
We told you about the R rating just a couple of weeks ago -- the film got that rating for and I quote "graphic nudity, some sexual references and language." I don't think Female Nudity often warrants an immediate R, it's almost always Male Nudity... but I might just be putting the cart before the, uhh, horse here. We'll find out in July when the film's out! Actually we'll find out before that when it probably screens at Cannes and all the loudmouth Cannes queens start a'yapping. (Bless you, my Cannes queens.) I'm also hearing there will be a trailer dropped tomorrow. 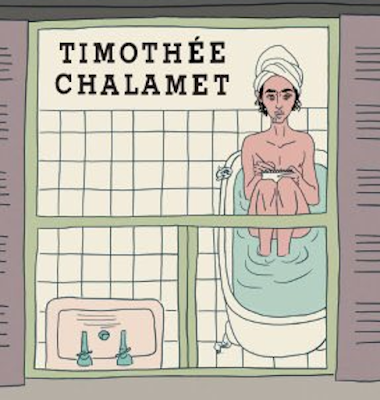 Great poster--it reminds me of one of those Tintin covers

Since Timmy's the only one naked (in water) on the poster, he might just be the one who'll participate in said graphic R rated naked sex scene. And if it's with Lea, it's going to be glorious!

if that wispy, pre-pubescent moustache is anything to go by, naked timothee is probably not something to savour