There's been enough Timothée Chalamet news this week since I told you he's presenting at this year's Oscar ceremony on Tuesday to justify another post, I think -- it'd be even better if I had a new photo-shoot of him to go along with all of the words but we'll make due with what we can scrounge up. And revisiting Timmy's sparkle harness is always welcome.
.

.
Anyway on to the news! A logo for Denis Villenueve's Dune movie, which is out in December, was photographed at some movie studio event thing a couple of days ago and made the rounds on social media, although the studio kept erasing the image off the web so I never bothered posting it. But there's a doctored version of it, replicating it pretty close, at this link. Original Kwisatz Haderach Kyle Maclachlan had good things to say about Timmy, also at that link. Next up is word on Chalamet's other big 2020 project... 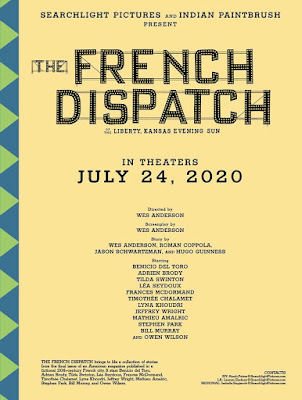 ... it turns out that Wes Anderson's French Dispatch movie is actually titled The French Dispatch of the Liberty Evening Sun (although none of us are gonna be typing all of that) and will be out on July 24th. You can see the big names of the cast listed above -- it's quite the troupe. Oh and it got Rated R for ""Graphic Nudity" which is, you know, a surprise. I can't wait to see how perfectly framed and arranged all of the genitals are by Wes Anderson. Anyway it sounds like it's going to be a set of small stories smashed together:

"[The film] brings to life a collection of stories from the final issue of an American magazine published in a fictional 20th-century French city.”"


Obviously we don't know if that means it will be a series of unconnected vingettes a la the Coens' recent film The Ballad of Buster Scruggs, of if this "collection of stories" will be interwoven across one long-form narrative, or what. We don't know! It doesn't matter! Just put July 24 on your calendars, hike up your pants, and get yourself to the theater on that date, mkay?