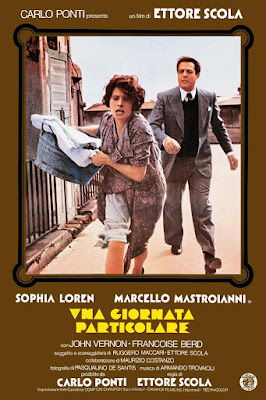 I mentioned this on Twitter but perhaps you're a smart person who avoids Twitter like the plague, in which case I will now mention it here -- Turner Classic Movies, aka the only reason I still have cable, is screening Ettore Scola's 1977 film A Special Day with maybe-you-heard-of-em Sophia Loren and Marcello Mastroianni tonight. I think at 10pm. The film's notable from where I stand because Mastroianni plays gay in it -- it's about Mussolini's targeting of homosexuals during WWII, and has the stars playing neighbors who meet for the first time when they both stay home during a parade celebrating the union of Mussolini and Hitler. Presumably he opens her housewife character's eyes to some scary ways of the outside world.
.
.
I've never seen the movie, but Mastroianni was nominated for an Oscar for Best Actor that year, a rare enough occurrence -- a performance not in English getting U.S. attention -- that it seems worth a look. Not to mention it's got an actor I always think of as a big time ladies man, in a stereotypically macho country, playing gay in 1977. That seems worth a look as well.
.

It's not perfect but overall a lovely film and those two always have a wonderful chemistry together.

Watched the first 30 mins and then hit record (had to go to bed because i'm old) but I enjoyed what I saw!