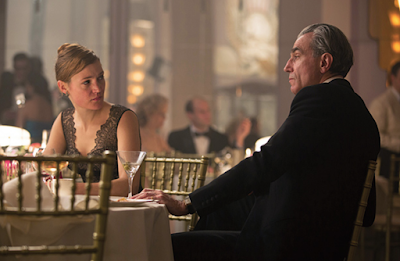 Alma: It's no business of ours what Mrs. Rose decides to do
with her life but she can no longer behave like this
and be dressed by the House of Woodcock!

An extraordinarily happy 65th birthday to the great character actress Harriet Sansom Harris, who played the drunken and depressed couturier disaster "Barbara Rose" in Phantom Thread and gives that great movie perhaps its greatest sequence of all.
.

We don’t talk enough as a society about the Barbara Rose sequence in Phantom Thread pic.twitter.com/CcVVlSOKr9
— Rob Plainview (@ClooneyDisciple) December 6, 2019

.
Over the holidays I was lucky enough to see Phantom Thread at Metrograph on the big screen for what, a fifth or sixth time (sidenote: they are screening it again tonight!) and my love for exceeds itself with every sweep -- here's my original rave review of the movie but if anything I wasn't laudatory enough; it has become in the past two years My Favorite Paul Thomas Anderson Film bar none. I want him to continue making complicated and contradictory romances for the rest of time like this and Punch-drunk Love; it's clearly his finest area of expertise. And who can blame him with a winner like Maya Rudolph at home?
.

In a really delightful happenstance of coincidence I actually walked by Harriet Sansom Harris on the street yesterday just a couple of hours before I saw PHANTOM THREAD again. I didn’t say anything because New Yorkers don’t say anything but HSH if you’re out there you rule pic.twitter.com/ADFwOzwQ9M
— Jason Adams (@JAMNPP) December 22, 2019

.
Harris really does rule, though. When you see HSH what role do you think of? She's been working for so long and been in so many things I think everyone will have a different answer. She always makes something miles more interesting though -- bless filmmakers who let her shine. In related news I also tweeted about Thread's other special lady just yesterday...

I have to admit, shamefully, that I don't even remember Harris being in that film! A combination of things conspired to make my viewing of it forgettable, so it had nothing to do with her. What role *will* I always remember her for? Firstly as Frasier's sharklike, unkillable agent Bebe Glazer... and second for her two heartbreaking minutes in "Memento" as Sammy Jankis' doomed wife. So much of that movie is built around the trick of making you see things from Leonard's point of view, but her sacrifice is a reminder there's something deeper underneath all the fun and games.

She will always and forever be Bebe Glazer for me. She is always wonderful and has done so many great things but she nailed that part and even if Bebe was a reptile HSH made you like her and be anxious for her to return. She should have won so many awards for it but incredibly I don't think she was ever even nominated! How does such a thing happen?

I'm going to have to second the shoutout to HSH as Sammy Jankis' wife in "Memento"! As much as Christopher Nolan has become a cold filmmmaker I don't care that much for anymore to me, I still will never stop getting shivers when I think of her saying that it's time for her shot!

But Harriet Sansom Harris! Her "Bebe Glazer" was magnificent. It's probably her role of a lifetime (so far), but wouldn't she be a great "Auntie Mame"?