Time To Strap Our Tom of Finland On 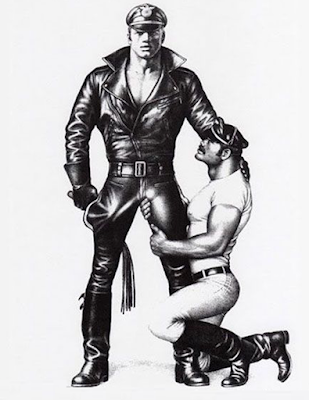 I try to keep MNPP mainstream-ish legits (give or take all my gratuitous gay nonsense) and so I always get a little tense when forced to talk Actual Porn here -- it's a thin line to walk. But the line between Pornography and The Cinema has always been fluid (ha, see what I did there) and it's about to get real moist indeed as Men.com (I know you know them, don't pretend) has teamed up with the Tom of Finland Foundation to create several episodes around their brand, including one by -- and now you'll see why I'm here talking about this -- Bruce La Bruce. BLB is the one that's always forcing my hand on this subject! So to speak.
.
.
(Sidenote: I didn't realize the above, BLB's filthy hysterical tribute to Andy Warhol -- and make sure you have your volume turned WAY WAY UP for it -- had made its way online; I'd just mentioned that last week.) But as with any gay man of I think any age Tom of Finland holds a place in my heart -- is that my heart; I am always getting my parts confused -- and I was terrifically disappointed by the weirdly sexless 2017 biopic about the famed erotic artist. A short film of pornographic proportions by Bruce La Bruce will surely right that wrong! BLB isn't the only filmmaker on hand -- he's just the only one of some renown. Others on hand include Cory Krueckeberg, Terry Miller (aka Dan Savage's husband), Matt Lambert, and Casey Spooner formerly of Fischerspooner and that recent feud with Madonna over a songwriting credit. (This is the gayest paragraph I have ever written on this site and lord knows I have written some gay shit.) 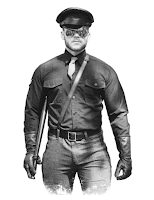 The first episode stars Instagram Star turned Adult Performer Matthew Camp (that's him in costume to the right) and it will hit on December 13th -- new episodes will be released once a month from there on. I'm not sure when Bruce La Bruce's specific episode airs, the press release doesn't specify, but I'll try to keep everyone informed... if I can manage to use my hands for typing at that point, I mean.
.
Who? Jason Adams When? 11:31 AM

Is Terry Miller also going to star in his film? Because he basically looks like a ToF model.