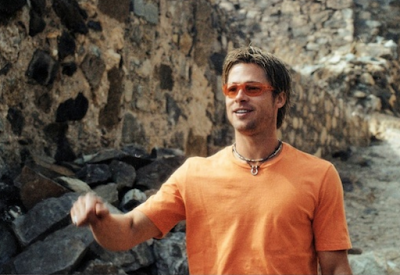 Jerry: It's a little hard to carry on a relationship
when I'm stuffed with straw and formaldehyde.

I was going to wish Brad Pitt a happy birthday by using his "Don't cry in front of the Mexicans" line from Once Upon a Time in Hollywood, but then I remembered he actually starred in a movie called The Mexican, and here we are. Happy birthday, Brad Pitt! I've never actually seen The Mexican -- it's on Prime but only through the end of the year! Should I bother?

Anyway it's looking increasingly likely that my favorite male performance of 2019 -- that'd be Willem Dafoe in The Lighthouse -- isn't going to eke out a Supporting Actor nomination at the Oscars this year, and if that holds true then I will be rooting for Brad in Hollywood come Oscars Day. He's terrific in a terrific movie. That's as real as a fucking doughnut.
.
Who? Jason Adams When? 5:19 PM

and that antenna scene is an affront to all 56 year olds who've let our-...themselves go

"The Mexican" seemed overhyped when it came out, but I wonder if it's aged well -- I haven't seen it since it was in theaters.

If you find yourself bedridden due to a debilitating illness or injury between now and the end of the year and you've totally depleted your watch list, you should probably rewatch CMBYN for the 1000th time rather than waste time on The Mexican. Total snoozefest.

The Mexican was mildly charming, if I remember correctly.

And yeah, in no way is he a supporting actor. Shame that a guy who has it all needs even more validation by taking away a slot from an actual supporting actor. (And I think he's also terrific in the film, but geez.)