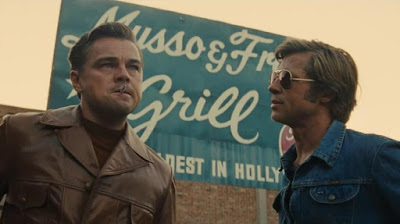 When it was first announced that Quentin Tarantino, a director I love, was going to make a movie about the Manson killings in the summer of 1969, my first feeling was one of turbulent queasiness. It was hard to reconcile Tarantino's vibrant pop violence with the sickening reality of a real life pregnant woman being stabbed sixteen times to death. Well it turns out that Once Upon a Time... in Hollywood, the movie Quentin that made, thought so too.

It turns out the very subject of the film, from its the fairy tale title on down, is about that space, that gap, between the real and the make-believe -- like the highways that its characters rip-roar down time and again, these folks are wandering in between. I don't think I've ever seen so many scenes set in parking spaces? The back-sides of restaurants and studios, where dingy billboards rest. The underbelly of a dreamworld, where the dreams are picked up out of the dirt, spat upon, and made shape. 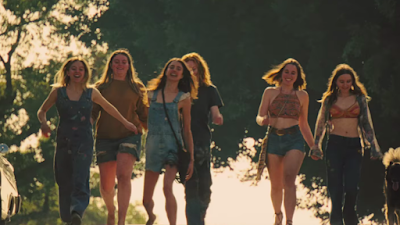 At a turning point in the film -- the place where things distinctly stop being real as a matter of fact (not that I'd argue they ever really started) -- one of the Manson Girls gives a brief speech about how TV showed them nothing but killing, and how the time has now come to kill the folks that taught them how to kill in the first place. Earlier there's a conversation about actors going method and staying in character the entire time they're on set, only answering to their fake names; Leonardo DiCaprio's leading man turned western heavy Rick Dalton is referred to his most famous character's name nearly as often as he is his given.

And of course we are watching Leonardo DiCaprio and Brad Pitt and Margot Robbie the whole time. As Al Pacino's character says early on the audience will just see the actor, the audience will just see the actor's most famous character, always. No matter what is happening. Later on DiCaprio's hilariously inserted into a Steve McQueen movie Forrest-Gump-style for one sequence... only to have Damian Lewis show up and actually play Steve McQueen inside the film we're watching. Robbie plays Sharon Tate, but when the character Sharon Tate goes to see one of the real Sharon Tate's films in the theater, we see the real Sharon Tate while Robbie sits watching her, miming Real Sharon's actions there, in the audience. 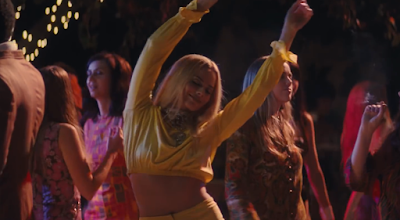 Kurt Russell, an actor who famously played a stunt-man for Tarantino a couple of years ago, here plays a stuntman, but even more than that Kurt Russell pops up to narrate the film at a couple of critical junctures. There's a nasty joke of a flashback that we're given to a character's backstory that the film inserts into the middle of a dialogue between Russell and DiCaprio, neither of whom were there for what happened -- the elusive truth of the story being told by the movie is never made explicit but it, like another scene slightly later involving a dust-up with Bruce Lee, is available for real interrogation and questioning.

Did those moments really happen? Or are the characters imagining them? By showing them to us is the film saying, "Yes this happened," or is the film merely dreaming along with its characters about possible outcomes, possible paths? When that Mason Girl decides to kill the real people playing the fictional people who pretend showed them how to really kill, taking us all down a road that didn't but could have happened, where does the dream factory start and where does it end? We are, after all, watching a movie. None of these things happened at all! Isn't Hollywood where we go to to process the bad stuff; to manufacture deliciousness like that prominently placed box of Velveeta we see at the ranch?

Tarantino looked at the task of making a movie about very real violence and gathered up in his arms every movie trick he's ever tricked and tickled us with to make the most entertaining treatise about the way the movies manufacture and coax us through horror that I can recollect ever having experienced. Once Upon a Time... in Hollywood is explicitly about the way the movies help -- and hurt too -- our sorting out of the world; how the cardboard stages give way to violence-riddled vistas and vice versa. There are bodies in them thar hills, but they sure are beautiful. And when the gates open, gee whiz, heaven. 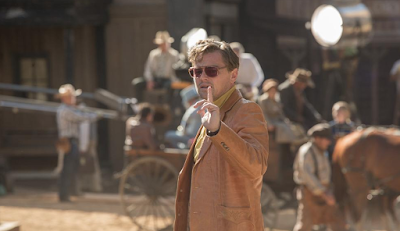 I'm still on the fence about seeing this. The cast is a strong pull and it sounds like Tarantino took care with Sharon Tate, and hopefully the other victims, to not violate them any more than they already have been.

But something is still holding me back. Normally I'd grit my teeth and take a chance but knowing Tarantino's penchant for over the top violence I'm going to wait to see if I can find out a bit more about the much mentioned last 20 minutes without spoiling them before I go.

Under The Silver Lake mines the same territory. We cannot tell truth from fiction or imagination or hallucination, but the emotional response to all them is very real even when it is the result of manipulation.

How would you compare the two films?

Penguin -- I actually think the "Alpha Male Fantasy" thing is a point being made; the wife-killing and the Bruce Lee scenes, as I mentioned in my review, are both flashbacks (one a flashback within a flashback) told by unreliable narrators who happen to be Straight White Men. I think we're meant to question whether those things happened the way we see them, and if it's not men rewriting things to make themselves look good, or bad-ass, or whatever. As for the foot fetish thing -- who cares? If directors stop injecting their kinks into the movies how goddamned boring are the movies going to become? Everybody should let their perv flag fly dammit. :)

Joel -- There is a lot of violence in the last act. Violence doesn't bug me, but yes, it's there, if it does you.

Verbocity -- I hadn't thought of Silver Lake but that's a great comparison, for the reasons you state. I've been holding off on writing down my thoughts on that movie because I want to re-watch it, but in the several weeks since I saw it the first time
I've thought about it a lot. It keeps popping into my head. But I'm gonna have to re-watch it if I were gonna dive into explicitly comparing the two. I'd say stay tuned, I'll write more about that movie eventually. I'll def watch it before the year is through so I can suss out where it falls on 2019 Things In Review.