Wound Me Up, Buttercup 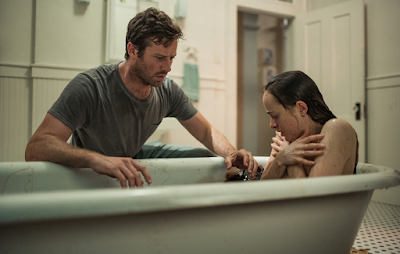 For months I've been complaining that Wounds -- the new horror film from Under the Shadow director Babak Anvari starring Armie Hammer and Dakota Johnson, and have you seen Under the Shadow yet, well have ya? -- seemed to be slipping through the cracks, release-wise, and now that I have seen Wounds I can say I understand why. It's not precisely terrible -- these are all talented people involved. It's just one or two degrees off from working, but those one or two degrees, with a project this high-wire, defeats it.

There are moments when it's kind of terrible. There are moments where Armie's called on to sell things I'm not really sure any actor could sell, but they're especially not his particular strong suits -- Armie, despite his ridiculous handsomeness, radiates a shyness, an awareness of always being looked at. I'm not as tall as he is but I recognize this same strain in myself -- we stoop over in order to make other people more comfortable, to not stick out quite as bad. 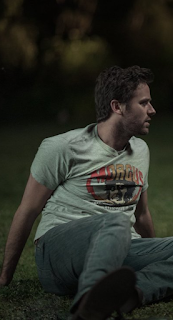 This quality worked real well for him in Call Me By Your Name because it made Oliver seem like he was covering something up which he was (until he wasn't), but here in Wounds this douchebag called Will that he's playing shouldn't be as aware of himself as Armie comes off -- this guy's a dumb drunk who's bad for everybody around him and should be played more insidiously poisonous than Armie plays him. Lord knows I can't stand Miles Teller but Miles Teller is more the type needed for this, precisely because I can't stand him.

That's not all on Armie; Anvari doesn't really help Armie out, holding his camera on those weaker moments, and in return a vacuum opens up in the film where a real loathing should be humming -- the central relationship between Will and his girlfriend Carrie (Dakota Johnson) is unraveling and that should feel way more fraught than it does. Instead we get some amusing sniping back and forth at the kitchen table when these scenes need to sting, to be dark and leave welts, and tear asunder. (That said I said about five times I wanted to turn Dakota's terrific line readings into ringtones; she does what she can with a severely underwritten role).

The frustrating thing is you can see that one or two degrees to the side where the movie they wanted to make lives, and there are terrific moments that crawl around that thing -- all the stuff with Brad William Henke is weird and dangerous and grossly effective, up to and including the film's out-there mouth-hanging climax. As admitted on this site before my number one fear is insects so in that sense this shit worked on me; I was fidgeting and squirming, scratching myself and saying out loud "HELL NO" sporadically from start to skittering finish. 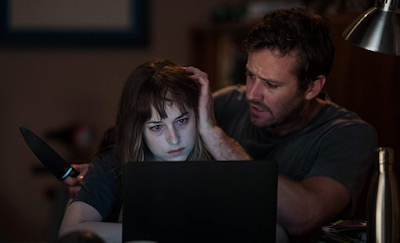 A fair assessment of Wound I think. I might say I was "wounded" with disappointment. It should have been better although there was much to um.....respect about it. I must disagree with you however in your feelings about Hammer:"more insidiously poisonous than Armie plays him". With a more unlikable actor like Teller (I don't know why he is unlikable but something about him has always put me off) would have made the character so annoyingly unsympathetic that I would have probably given up on the film altogether never finishing it.