I've been attending a lot of screenings of Oscar hopefuls lately and I find some of the conversations I overhear at them so utterly depressing -- films dissected like frogs on slabs, sliced up into nothing but nominations and statistics, who might win whats. On the one hand I love Awards Season because I love Great Movies and there are so many Great Movies coming out over the next few months my schedule of movie-going is literally bursting its seams... but on the other bigger floppier hand, I hate the way it forces us to talk about these Great Movies, to rank them like checking a mare's teeth, and even worse to then just consume them up and move right on. Next, next, next, until nothing's left.

It's the enemy of this art-form I love more than I love 75% of my blood relatives... but then as Martin Scorsese detailed in his as far as I'm concerned already legendary NYT piece this week it's hardly the only or the worst enemy besieging the movies and we their admirers these days. Anyway my point is whenever you need a respite from the exhausting Oscar chatter just know you can come here to this safe space, where I only let it slip in about 5% of the time, and otherwise I'm just talking the movies themselves, which will outlast all the awards speculations thank god. 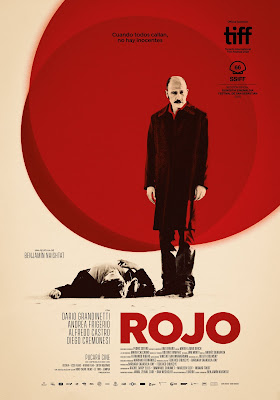 Which brings me to my point, which is there are a couple of small genre films hitting the home market this week that I have neither seen nor heard much about so far, but which both sound worth seeing and hearing about, so let's expand ourselves. The first one is called Rojo, a surreal-sounding Argentinian revenge-thriller of sorts from writer-director Benjamín Naishtat -- I guess it screened at TIFF and the audience went nuts for it. Rojo was released on Amazon yesterday, here's the trailer:
.


.
And the second film is a supernatural thriller called Midday Demons -- it's about an Irish artist named Megan (played by Fiona Glascott, who played Matt Lebanc's ex-wife on Episodes) who travels to Italy with her Italian husband when his uncle dies and leaves him an actual palace -- as is usually the case with these stories when it comes to the movies the estate seems to have some deep dark secrets that Megan begins to uncover... dun dun dun. Here's its trailer:
.
.
Midday Demons will hit streaming next week on the 12th (the link's not up yet, I'll update this post with the link when it is). Now don't both of these films look and sound interesting? Like about twenty thousand times more interesting than sitting through a movie about a Ford car fighting a Ferrari car to the death? I seem to think so, but sometimes I feel awful alone on this island...
.
Who? Jason Adams When? 12:41 PM