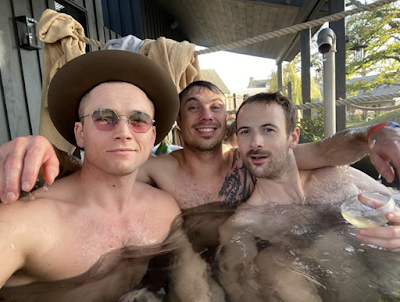 The Rocketman himself turned 30 yesterday and apparently celebrated with a big bash with friends (according to his Instagram posts anyway) -- oh to be a fly drowning in that tub. Happy belated, Taron! Actually... I don't want to jinx myself... but I might be able to wish him a happy belated in person this week as there's a Rocketman press event I'm hoping to go to. Fingers crossed!

Even if I don't get to tell him in person though I still think Taron gave one of the year's best performances by an actor -- here's my review of Rocketman from way back. Have you seen the film by now? Do you think he'll get an Oscar nomination or, as so much else, did Rami Malek ruin his chances?
.
Who? Jason Adams When? 10:52 AM

He won't get nominated but at least he's completely out by now.

He should get nominated but probably won't. Maybe he should've worn false teeth that he can barely get his lips around.

this is going to bug me all day, who's the actor on the right? i just saw him in something....taron didn't tag him in his IG post.

Thad -- I don't recognize either of the people with him, sorry