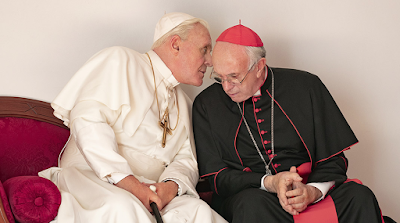 If you want a review of a movie about Catholicism that doesn't mention that organized religion is a scourge upon humanity I recommend you read somebody else's reviews about religious movies, because I have a real tough time not viewing movies on the subject through the lenses I stare at the world through, which are very much of that kind. That's the baggage I took with me into Fernando Meirelles' new film The Two Popes, and that's the baggage that undid the majority of my enjoyment of what was certainly a perfectly well-acted and well-shot thing.

At a certain point the film, which tells the story of the transfer of power from Pope Benedict (Anthony Hopkins) to Pope Francis (Jonathan Pryce) in the decade following John Paul the whatever's demise, began to reek real hard of propaganda to my suspicious sniffer -- as the world media and this movie would have us believe this Francis fellow is The Good Guy, redeeming that curdled institution et cetera, and yo everybody the Church loves homosexuals and abortions and such totally now, let's all boogie up straight to the pearly gates.

I'm not buying that case, if the sarcasm of the previous paragraph didn't shoot devil-eyed daggers straight into your (non-existent) soul -- I kept thinking of the tough and honest ways that Francois Ozon wrestled with the Catholic Church's legacy of awfulness in By the Grace of God earlier this year; there's really almost none of that from Meirelles. The subject is so skimmed over it's practically obscene -- Francis listens to a vague confession from Benedict about shuffling offending priests around and Meirelles makes the sound go out in the middle of it, because such ugliness might ruin our vibe, and then a couple scenes later the two fellas are whooping it up watching soccer. O, what a lark!

The film works best as a procedural of the ridiculous processes by which the Church functions, all of them ridiculous, but it quickly reveals itself to exist within a moral vacuum it has no intentions of addressing, and by its end I was turned entirely furious by the people chuckling around me at this lighthearted rendering of two ol' dudes in goofy robes just chillaxing, like regular dudes do. It has no room for the generations of trauma that institution has inflicted; it pays quick lip service and swerves straight back to its puff piece image rehabilitation intent. I will not wave away those sins or say Hail Marys for this up to no good shit. 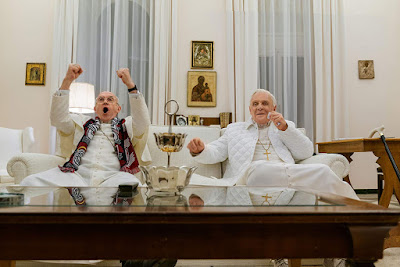 Somebody had to say it.

Just reading the review made me have to dig this gem from the Benedict era up as a palate cleanser. I sure as hell wouldn't put myself through the head exploding torture of actually watching the movie.

How dare you say religion is a scourge when everyone knows it's actually more like a cancer. 😉 I watch TV sometimes and think to myself what the world would be like today if the middle-eastern folklore that is Abrahamic religion hadn’t been spread across the planet like an STI by the post Roman Empire, Roman Catholic Church. Maybe the people who use religion as crutch would all be Shinto Buddhists right now and the world be much lovelier place.